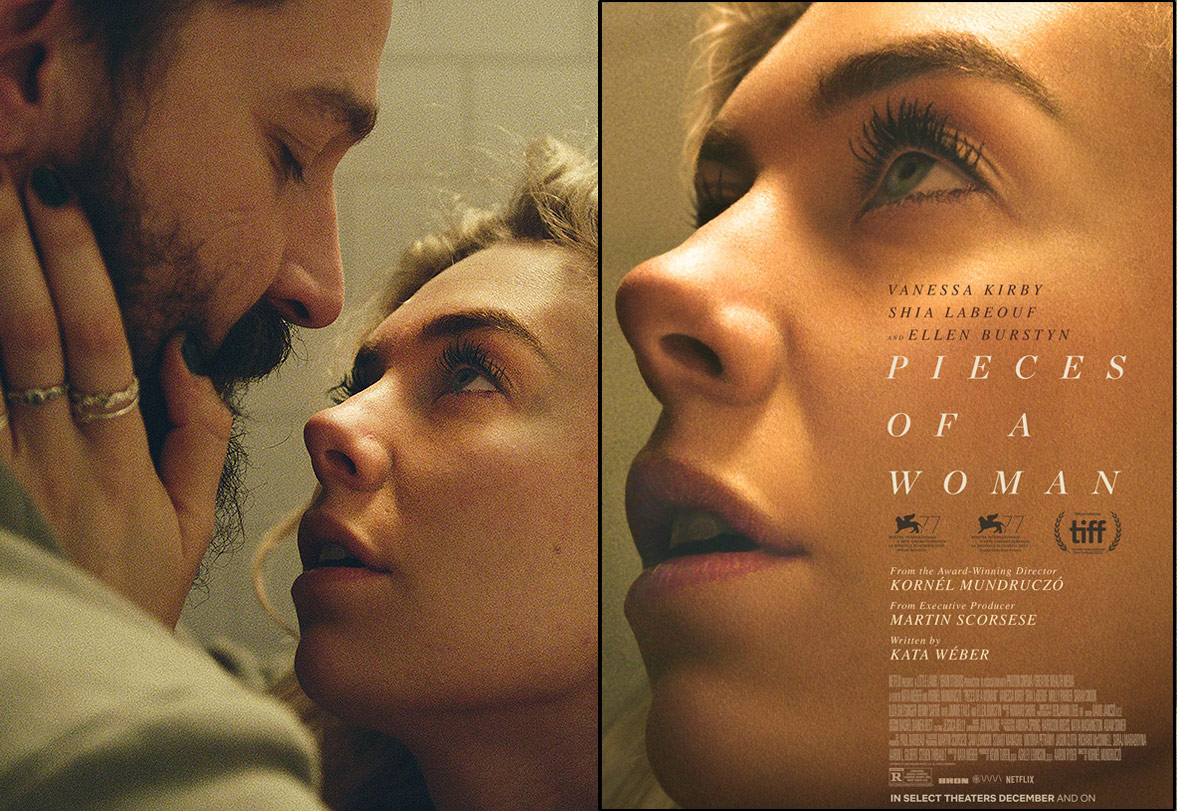 Shia LaBeouf's image has been noticeably absent from ads promoting his new Netflix movie, Pieces of a Woman, co-starring Vanessa Kirby. Kirby alone appears in an extreme close up on the movie poster, in a photo that initially included LaBeouf as she looked up at him. His image has been completely removed, leaving Kirby looking up into space.

LaBeouf has been charged with sexual and physical assault by his ex-girlfriend, FKA twigs, whose birth name is Tahliah Debrett Barnett. She is also accusing him of emotional distress and knowingly giving her a sexually transmitted disease. Another of his ex-girlfriends, stylist Karolyn Pho, says she suffered similar experiences with LaBeouf.

Netflix removed LaBeouf from its award consideration page for Pieces of a Woman, which debuts on the streamer today (January 7).

Since being sued by Barnett, he has also been removed from their For Your Consideration page for the film, as well as from the movie summary and the movie stills. A Netflix Twitter 30-second ad for the film shows only Vanessa Kirby and Ellen Burstyn, with the words "Vanessa Kirby is a wonder in a career-defining performance" (Vanity Fair) and "Ellen Burstyn is a powerhouse" (AwardsWatch). There is no evidence of LaBeouf being in the film in the clip. Both Kirby and Burstyn are expected to receive Academy Award nominations.

LaBeouf responded to Barnett's allegations in an email to The New York Times, saying, "I have no excuses for my alcoholism or aggression, only rationalizations. I have been abusive to myself and everyone around me for years. I have a history of hurting the people closest to me. I'm ashamed of that history and am sorry to those I hurt. There is nothing else I can really say."

After news broke about FKA twigs being abused by LaBeouf, Sia, who hired the actor for her video "Elastic Heart," tweeted in December : “I too have been hurt emotionally by Shia, a pathological liar, who conned me into an adulterous relationship claiming to be single. I believe he’s very sick and have compassion for him AND his victims. Just know, if you love yourself- stay safe, stay away.” She added, “Also I love you @FKAtwigs This is very courageous and I’m very proud of you.”

Barnett's attorney Bryan Freedman clarified that his client filed the suit after LaBeouf refused to get "meaningful and consistent psychological treatment," adding that she wanted to "prevent others from unknowingly suffering similar abuse by him."

According to the New York Post's gossip column, Page Six, LaBeouf, who is currently dating actress Margaret Qualley, is now in talks with his advisers in regards to entering rehab. ~Alexandra Heilbron

Update January 8, 2020: Margaret Qualley and Shia LaBeouf have split after just a few weeks together.