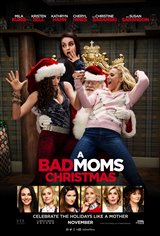 Where do I start? Offensive, stupid ,I laughed once . The line miraculously didn't have the words fu.., di...,Mother f.... ass cra.. It's embarrassing that such a fine cast would make such a horrible movie. I wish I could rate it with negative stars.

Somehow even less funny than the other 'bad moms' movie

An awesome and hilarious movie!

I thought the movie was funny! It was better than the first one..Enjoy the comedy and don't take it so serious. Fun afternoon with friends.

Really bad! Not funny at all. Bad acting. Poor story. Women everywhere should be ashamed.

If real Moms are as stupid as the ones in the movie it is no wonder they have a hard time in a world with so many conveniences and luxury's. Really bad movie. Pure crap!

OMG maybe it was the mood I was in but this was absolutely hilarious!

I don't care about spelling, nor am I paranoid. I certainly didn't mean to imply I was giving 5 stars for a fake review, and I'm not saying reviews are being deleted. I just think this person really got their point across that they didn't like this movie and they don't have to do it for all the movies they hate with 30 reviews saying the same thing in the same tone. *mic drop*

terrible movie,,too many swear words,, dumber than a box of rocks,, waste of good actors trying to be dumb,,

started kinda slow but had some really hilarious parts

I though it was a funny movie ... to have a good laugh and yes some parts are true, we moms do it all, the shopping, wrapping, cooking, decorating etc.. so this movie to me was a good relaxing chili'n movie to have a good laugh is all. My husband came along with me and he seemed to enjoyed it as well. You must admit there was some really funny scenes.

I can't even imagine that somebody spent money to make this... it's not movie.. It's p.. of nothing.. Don't waste your time before Christmas!!!

Loved it??????I think every mom would get a "kick" out of this movie!" busy moms" can relate to at-least 1mom /actress on the screen! Saw w/9 other ladies & No regrets! We all ??'ed it! The film is for moms who wrk and juggle it ALL but @the end of the day "We made it" and would do anything at any cost for the happyiness of our kids lol all the craziness the hectic schedules.. & busy fast world we live' in w/real problems but we can do it All ! 🙌🏼 So Moms, Go see for yourself 👍

It was really funny. A lot better than I thought. A lot of swearing though.

Better than the first one. this one was a lot funnier

This movie is called A Bad Moms Christmas for a reason. They are bad moms! They swear and get drunk and have sex! This is not a wholesome Christmas movie and for goodness sakes, it's rated 14A so anyone who brought their children to this movie is just silly! Is it going to win an Oscar? No. It's a dumb movie to go see with your girlfriends and have a few laughs.

I'll be honest, I didnt even see the movie. I just saw 3 5 star reviews written by the same person. So I felt I had to try to counteract them be giving a 1 Star. So if this review gets removed because of that, they need to remove the fake 5 star reviews as well.

Had to come and see the drama unfolding. The drama going on in this review thread is more entertaining then the movie. Who will strike back next? the supposed person typing multiple 1 star reviews, or the paranoid person who is flat out posting multiple 5 star reviews? OMG! THE SUSPENSE! STAY TUNED!

Watch it when it is on tv. Movie wasnt that good. I agree with the ppl below, whoever is the person giving it 5 star reviews please stop you are the only one messing with the rating that can be confirmed. You must live a sad life.

Lol, came here to look at reviews and I see somebody saying all the bad reviews are written by one person because of wording, lol, ok detective. Yet, flat out posting multiple 5 star reviews. What a pathetic hypocrite. tHIS MOVIE SUCKED. Wow, what nonsense. They must be the movie review police or something. I wasnt even going to write a review untill I saw for sure it was the same person giving it 5 stars multiple times. Well, heres my 1 star. Move on with your life, focusing on some dumb movie reviews is pathetic.

I'm sure it does have a poor rating on other websites. I am not saying you're doing it in multiple sites, I'm saying you're doing it here on this site. I'm sure this movie was probably pretty darn bad- I'm not arguing with that. What I AM saying is that you're posting it over and over again here, for any movie you didn't like and only need your opinion once. You didn't need to put yet ANOTHER review saying the same complaints. P.S. Bad Mom Christmas doesn't advertise itself as a KIDS MOVIE so I don't know why you're so focused on that.

Also: The Movie Review Troll will also say how they or their partner "fell asleep" multiple times, or that they "walked out". She/He also has a hatred for Tom Cruise. So yeah, lots of multiple bad reviews from one person on this site. Doesn't mean the movie is great and they are making it look worse with low rating, just means this person has a weird vendetta against any movie they personally don't like, including kids' movies.

Im not saying the movie is good or bad, what I AM saying is that one person wrote 90%of the bad reviews about this movie (and other movies currently and previously in the theatres) on this site. The wording is exactly the same. Just look for the same style of writing with these words over and over: "moral", "immoral", "drunk", "F word", "child said F word", "not a Christmas movie", "drunk women", "sex" etc etc. You did this with that terrible movie The House, where you said how greasy Will Farrell looked about 50 times. I agree that movie was probably awful but dude. We get it. If you don't like a movie leave ONE review and that will suffice kay, thx

Do not under any circumstance take your kids to this move, and do yourself stay home with them and skip this drunken, immoral, expletive filled dreck.

Read the reviews ppl, wish I would have. My review isnt based off of the alcohol or cursing. I just didnt like the movie, no real plot or substance. It was all pretty much pointless.

The F word is used way too many times, even a child was saying it. We get it !!! Sorry we wasted our money.

I liked it. It was a cute and funny Christmas movie.