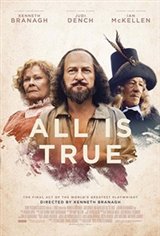 Loved this film. I haven't enjoyed Shakespeare this much since seeing Prospero's Books on screen in the early 90's. The acting is fantastic and I learned a great deal about Shakespeare's two daughters and about his 11 year old son Hamlet Shakespeare that held his heart closer than any other human being. Wish we could get more of this sort of thing on screen rather than films like Late Night.

Quality film based on mostly fact. Great acting though out