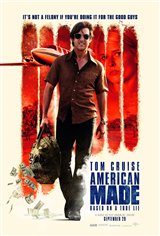 (Huge Spoiler Alert below) In a vast sea of drug running movies involving the Columbian Cartels, this movie crashes and sinks to one of the bottom feeders. Tom is uninspired and phones it in as doomed amoral CIA dupe pilot Barry Seal. His entire operation comes off as a huge joke, as it turns out, one of the biggest problems with running drugs for the CIA and the Cartels is that you have issues hiding the money, as the numbers become non-sensical. The movie properly portrays the CIA as Users and Abusers of hard working Americans, but does not properly go into their heavy involvement in the drug trade and hooking America on cocaine to fund their black programs. Fine for a rental, and largely forgetable, which is I'm sure how the CIA likes it.

Very entertaining, while exposure to this serious issue. Tom Cruise is marvelous as Barry Seals..

Great movie Very entertaining and funny as well, if you are a Tom Cruise fan than this is a must if you are not then appreciate how well the movie is put together with a great story ark and masterful story telling

Would be even better if B & H Clinton and the many murders surrounding their involvement in the drug/arms trade were included.

Looks like the Multiple Movie Reviewer Troll hates Tom Cruise. Remember troll, one review will do! I actually like him as an actor, and enjoy most of his movies. This one was mediocre and almost TV movie of the week feeling.

The only movie where someone gets blown off in his car and it actually looks like the real thing. No Hollywood style fireball. I feel Cruise does an amazing job at impersonating a character who actually existed and show both his good and bad sides, his strengths and weaknesses. A talented pilot who doesn't realize until it's too late he's just a pawn in a very dangerous game. Can you believe this stuff actually happened and US government civil servants firmly believed something good was going to come out of this mess ?

I would probably have rated this movie at four stars however I’m giving it 5 to compensate for all the cynics out there that there is NO pleasing. You know the ones, “lousy movie, bad acting, another stinker from Tom”. This movie was fun and entertaining, I don’t think it’s supposed to “move you”. I honestly believe that for some of these movie goers there’s just no pleasing them. Here’s a little advice for them,...stay home and watch Netflix. Then put your rating experience to work by rating Netflix content, it needs it more then the movies in the theatres.

And yes, another stinker for Cruise!

Cruise can do no wrong. Best actor ever!

Good story line, not much action, but really draws you in. Shows how some people are never satisfied with what they have, even though they have a lot and are willing to risk it all for even more. Everyone is supercritical of Cruise, but he did a commendable job in this flic.

I call this a dramedy, a bit of fun ,a bit of fun camera work , lousy acting by most especially tom, you don,t get what you pay for. I watched on line and it was ok for free...

Worst movie of the year. Cruise needs to retire. There are more talented actors than him . He ruins every single movie.

Good one, don't miss it.

It wasn't very good. It was rather boring. It had no suspense. It felt more like a TV movie.

Happened but the story was told like a Hollywood story. Made to fit Cruise’s movies. The last time I saw a good movie from Cruise was War of the Worlds.

Don't waste your time or money

Tom is well past done! Terrible

filthy, & disgusting ! my rating would be NO stars. i walked OUT after 45 minutes and felt dirty! its why i suspect the movie business is down so many billions of $ mostly trash plots, and obscene language

Enjoyed this fast based and somewhat fact based movie. Of course I do like Tom Cruise. The titles between the sequences gave the movie an interesting look and moved the action along. A perfect movie for Tom Cruise.

True story only designed for Cruise. I don’t buy this movie.

Based on true events. Movie was very entertaining and tom was outstanding

I enjoyed this movie...why do so many people who don't like Tom Cruise go and see a movie he's the main star in???? It was good entertainment ...

Cruise should retired or change his style. Same expression and tone of voice. No matter what character he is playing. Boring actor.

Can't decide if this one is the worst or Happy Death Day.....ok, this one WAS the worst.

Very real story from someone who lived and survived the '70's. Moral of the movie was well conveyed ... never trust our government.

The sad thing is this happened and nobody cares unless it affects them personally.

Sorry...I'm not an idiot. I knew it was based on a true story & the truth is Tom was bad. End of story.

Happened and Hollywood changed the story like Disney does with all the movies. Only to show Cruise.

Great story line, most of the idiots that watched this movie do not realize this did happen