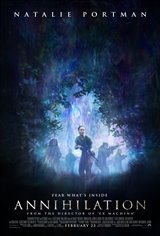 I was bored out of my mind. I watched it on Netflix and had to fast forward through a lot of it. Blah!

The only saving grace is the CGI of this movie. The story had potential, the story take on a wired overcomplicated turn and simply loses the audience. It's a fun ride if you are into B movies style stories. Ultimately forgettable.

This was a very disturbing movie in many ways. Love conquers all. Who was really real anyways? We had to watch it several times because the story jumps around a lot. There were too many gaps in the story line.

Annihilation of your money! This has to be the worst of the worst b films ever.

It's not war of the worlds. It's just stupid.

It's a waste of time

I dont normally take time to write reviews but had to comment after seeing several people rate this as "the worst movie ever." This was a thought provoking, beautiful movie with one of the most terrifyingly tense scenes (involving a bear) I have witnessed in a while. The film is not perfect, but most of my beefs with the choices made by the writer and director of the film, Alex Garland, on the first viewing, made more sense on the second viewing. This is a science fiction, psychological horror film. If you have seen all 8 Fast n Furious movies and can hardly wait for 9 & 10, you may not like this film. Saying it is the worst movie ever made is ridiculous.

Don't waste your money ! ! ! Drags for the first 30 minutes and goes downhill thereafter. Imagine a woman being dragged into the water by a giant alligator, flipped back and forth a few times only to escape without a scratch. . . . and the gator has a monstrous mouth and giant teeth. . . and not a scratch afterwards. . . I did the only reasonable thing. . . I walked out ! ! !

Brilliant, works on so many levels. The most psychedelic film I've seen. The whole movie appears to be a metaphor for a heavy mushroom or acid trip.

To say this is the worst movie ever is an insult to the worst movies ever. It's better than that but definitely not by much. The casting is terrible. Not one single actor is believable or even interesting. Nothing is created to keep your attention with any of their acting abilities or their character development. The story, though alien based and therefore a certain level of "Suspension of Disbelief" is required, is just terrible. A five women team of "experts", all with obvious psychological issues (established immediately through open discussion about those issues...Literally 5 minutes of them becoming a team!) would NEVER have been selected to investigate this ridiculous situation. It makes you shake your head dozens of times as they make their way through to the conclusion. Nothing makes you feel for the characters in anyway. You will regret watching this movie the moment it ends and forget about it completely two days later.

Captivating movie. Interesting take on a well trodden theme of alien influence on Earth. Incomparably better than The Shape of Water. Note: if you are a teenager you might not like it.....

Beautiful, interesting, well acted sci fi. If you like sci-fi and found the trailer interesting you will probably like it as much as I did. However, if you listen to our repetitive, angry, multiple-posting troll friend you may miss a really well done film. The people that hated this movie may not enjoy sci fi or movies that don't follow the usual patterns and rhythms so I don't understand what brought them to the theatre in the first place.

A little high brow for the avevger set. Requires some actual grey mater to make sense of it. A delightful and thought provoking film. Go see it at Hollywoow 3 for $4.75. Well worth the price. And you support small business at the same time and not those momey grubber at Silvercity

It was an awesome lovecraftian film. If you need things exploding and big robots and boobs then you probably won’t like the film. If you enjoyed the book you will probably like it

Brilliant Tarkovsky-eque sci-fi film - for those who like to think when they go to the cinema.

it deserved no star awful movie wasted my money

This was the worst movie ever!Beleave the people that say the same Waste of time and money!

Worst movie ever, boring, Save your money.

THIS MOVIE WAS DIFFERENT. VERY SUSPENSEFUL AND IT KEPT YOU SITTING ON THE EDGE OF YOUR SEAT. I LOVE IT. SPECIAL EFFECTS WERE GREAT AS WELL.

One of the worst movies i have ever wasted my time and money on.

I liked this movie.

While the fresh and different take on sci fi (Arrival was also along this line) is appreciated, this movie suffers from several missteps and ultimately ends up not achieving any measure of true magic. Firstly this movie is S....L....O....W..... it takes forever to get off the ground. Cringe-worthy love scenes between the lead and her husband could have been edited and cut to give us more of the experience of exploring Area X. The chemistry between the various actors is jilted and awkward as well. The movie appears to be trying to be 3 things at once: horror, sci fi, and psychological thriller. It fails at all three. The horror scenes are more extreme violent than scary. The sci fi scenes are so CGI'd and trippy that one feels like Alice in Wonderland. Finally, the psychological aspects just come off as contrived and transparent. A good rental, not enjoyable to sit for 2 hours through at a theatre.

No boring but the suspense was almost predictable. Still some scenes were very scary. Good acting.

The acting was amazing; the story not so much. I didn't like the interrogation of the characters and the flash back to the incidents.

GARBAGE. Any one that says is Great must be high on drugs. I say burn this damn film so people don't waste 2 hours of their lives watching it better two watch any other film out there.

One of the worst movie I have ever seen. Waste of time and money. Everything is terrible. Can we request a refund

The movie was very good. It had me thinking for hours what happened next. You have to go with an open mind. I never imagined seeing the special effects and the scenes of people dying was realistic. My opinion... If some said it was garbage... Make a better one. I was in the armed forces and I thought this movie was a rush. Awesome effects and acting for those real-life reactions of fear and loss. Hi Tessa !!!

Terrible save your money

Below mediocre. Might be a great movie for somebody who has never watched a sci-fi before or is starting out to like this genre. Using "special effects" to justify an intelligent lifeform (!!) does not simply make the cut now a days. Did not expect Alex Garland to take on projects this weak. Not one of those movies that that people will start to get it few years down the line and wonder why critics did not give it a 4 star rating.

GARBAGE. Some one has to be paying this loosers that claim this is the best movie ever as I am sure if you took a survey most would agree that this movie should be used to fuel a bonfire at least keep the people warm not sleeping through it.

First of all, for all you teenagers, there are no Transformers fighting to save the universe, so if that is what you expect, save your lunch money. For anyone else who wants to see a smart, well paced, human story that builds with an unexpected uneasiness, you will love this movie. The acting is great as are all the characters and not over done. I found there was not a boring minute from beginning to end. A Beautiful Scary Movie !

An amazing movie, loved it from beginning to end, reminds me of Interstellar, not for the Star Wars or Star Trek gang.

I was very disappointed by this movie. The preview looked so interesting, but the film has an unfathomable plot and falls to take advantage of stunning visuals and excellent cast. Save your money!