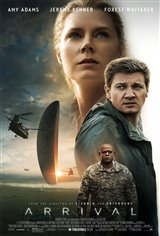 Well done and very cool peek into how the world would handle this if it were to happen.

I would say that most of the time, I'm very shocked and disappointed with the reviews on here. This, in my personal opinion, is another one of those surprises. I absolutely loved this movie. Incredible cast with incredible acting talent. Adams is a very underrated actor who delivers a wonderful performance to this film. The effects, action and storyline are fun and amazing with a really cool twist that made me think. It's nice to see Hollywood make a movie about alien life with superior intellect and technology but have not the stereotypical theme. If you enjoy excellent acting, aliens and different look at aliens visiting earth, you will enjoy this movie.

Move and acting great; however, only for intelligent people. Sorry folks who fell asleep.

The plot for this movie was so thin, that it could have easily been told in less than an hour. It was not confusing, it was badly told. Renner and Adams had poor chemistry. It would have made a great movie for TV.

There is not a wasted second in this finely balanced tale. Loved it!

It seemed that something, eventually would be happening but it just kind of dragged until you wish it would hurry up and be over. Don't recommend.

Poorly directed and weak script. Really a waste of time

Ignore the bad reviews of people who couldn't follow the plot. It is a movie that requires your full attention and respects its audience.

A very nice spin on the whole Alien theme.

dissapointed. this wasn't a real alien movie, I didn't like the storyline. The music is so boring. Good actors, but what kind of movie is this? Contact and Prometheus was 10 times better. I am a movie goer, and if you want to do a real alien contact movie, you need to do better, kinda like contact meets independence day meets interstellar with mind blowing action and special effects.

Fantastic film. Could see it many times.

If I could have given this movie zero stars, I would have! This is the most boring movie since AI!! Plot was boring, and completely non-sensical. I am a fan of all of the actors in this movie, but wish I had not seen them subject their careers to this piece of drivel!

Just could not get into the casting. Amy Adams was totally miscast. The storyline was too predictable and slow. No way one person could solely communicate with the aliens...dull. The aliens should have destroyed the script.

Ignore the bad reviews as this was a good movie. Don't get many these days so when it happens, as it did here, it's worth watching.

This was one of the most boring movies I have seen in a long time. The plot developed very slowly and wasn't worth the wait. The lead actress, Ema Adams, was very weak in her performance and just had a stupid confused look on her face. Hard to believe that the US government would trust such a person in such a critical situation. But then again, maybe Trump would appoint her. Don't waste your time on this movie unless you have trouble sleeping in a theatre

One of the best movies I've ever seen! Don't see this thinking it's a typical alien movie. I love those too...but this is more of a human story. Days later...I'm still thinking about it.

sheer waste of your money and time, to watch it.

The most overrated movie of the holiday season. I love a good alien flick, but this film was just plain dull and went nowhere. Yes, the acting was good, but the story was as bland as can be. The ending bordered on ridiculous. If you want to watch a quality film about cracking a foreign language or code see The Imitation Game instead.

Really enjoyed Arrival you had to think and read between the lines a little. Bright positive look into other potentials for life. I am still disappointed in Manchester by the Sea I will never trust the critics after that sad disappointment

If you have even the most elementary grasp of logic or physics, RUN AWAY!!!!! If you know anything about filming and want to see how to ruin a movie by using an F1.0 lens to eliminate any significant depth of field, then this is the movie for you... The logic is deeply flawed, the science gibberish, and the attempts to use shallow depth of field to be artsy are amateurish at best. I left the theatre with a headache.

Total waste of our money, I slept through most of it. The loudness woke me at times.

Not much to this movie. Did not seem understandable and ultimately did not make much sense. I was having to fight to stay awake which is not a sign of a compelling movie. Wait for the DVD release or Netflix.

Very well acted, and well choreographed throughout. (No that doesnt mean dancing). Warning: IF you're shallow and looking for a film that entertains you without expecting you to think, then don't see this one. Try "Secret Life of Pets" or something really simplistic. Otherwise, you will watch this, wish it was over because you didn't understand the nuances in it, and ultimately, you'll give it one star rating like the nice folks above. ;)

Wow, if only I had a lamp with a magic genie I would have wished I had never sat in the theatre to slumber through this. So painfully boring and slow moving for me; but then, I am not one of these brilliant five star raters who can see beauty and meaning in watching icicles form and melt; if you are of average intelligence and bored easily; forget this.

Could actually be Amy Adams worst work to date. If I had my way, I'd give it half a star, just for Forest Whitaker.

What I would actually call a science story. Not a goofy fantasy

Absolutely brilliant. For those who hated it, this is not a movie, it is a film about ideas: language, memory and desire (past and future); it is about communication and its centrality to all life. If you are interested in only special effects with people killing one another, and simple good side versus bad side, go see Star Wars.

I wish I had waited to see it on Netflix. I finished watching this movie because I paid for it. I kept hoping it was going to get more interesting and speed up, but it never did, and the ending was anticlimactic.

DIDNT GET IT UNTIL A FEW THINGS WERE SAID NEAR THE END OF THE MOVIE. MADE ME THINK THROUGH THE WHOLE MOVIE.NICELY DONE. WILL SEE IT AGAIN AND B ABLE TO UNDERSTAND IT THROUGHTHE MOVIE.ADAMS IS AWSOME AS USUAL.