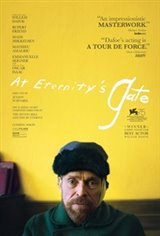 As I have studied Van Gogh, this actor portrayal is superb, but the director of photography is painfully obsessed with trying to emulate the movement of colour that Vincent was able to recreate from his brain.

Interesting look at Van Gogh, but, of course, totally depressing. I staggered out into a dismal afternoon. Not a film to lift one's spirits, but my own fault for going

Fascinating depiction of the late years of a troubled genius, unappreciated in his own time. Terrific acting all round and at least a Best Actor nomination for Willem Dafoe. Guru Bob says 90/100