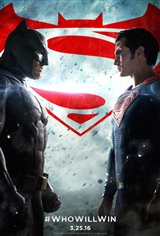 Movie was great just wish superman did not die but wonder woman was great . Bruce was good to like this movie 5 stars.

this is a really good dc movie and like the action and ending but just did not like when superman towards the end but still a great movie to watch .

1 of the most boring,depressing,dull movies ever

. LAST BUT NOT LEAST - BEN AFFLECK/ BATMAN WOW WOW WOW ...Val Kilmer and George Clooney are breathing a collective sigh of relief after seeing this pile of steroid garbage take on the role of Batman. Yes after 2 long decades the monkey has been removed off of their backs...The worst possible Batman performance in history award can now be owned solely by Mr. Ben Affleck...Did anyone ever doubt him???

Jesse Eisenberg/ Lex Luthor - Wins the award for all time best over-acting a comic book villain since Willem Dafoe played the Green Goblin. After this heinous acting performance by Eisenberg, I am beginning to think Heath Ledger raised the bar too high for this new generation of Hollywood soft, pretentious pretty boy actors.

Jeremy Irons/ Alfred the butler - Holy cow man! This guy has been mailing it in for the better part of 2 decades (since Die Hard with a Vengeance). It seems the studio financiers felt the need to strengthen the budget here by slashing the Morgan Freeman and Michael Caine salaries allowing the 2 characters to morph into one, contemptible performance by a British actor with some real acting "chops"

Confusion - Early scenes will attempt to confuse the viewer (successfully) in order to tie together several gaping plot holes (unsuccessfully). The problem here is you can see these outcomes coming a mile away. The viewer is left feeling patronized and a lack of a decent script becomes evident, as a result.

Zack (rhymes with HACK!) Snyder/ The Director - The slow motion scenes used in this movie are such a desperate contrivance. His signature trademark only lends to extending the run time of the movie (ad-nauseum) and slows the pacing down (or lack thereof) to a complete stand still at times. There's slo mo used during the funeral scene...'NUFF SAID!

The opening sequence - Bat boy Bruce Wayne sees his parents killed at gunpoint....AGAIN! Why must we always have to be spoon-fed the origin of this character in every damn movie. The psychotic flashbacks from his past will likely be thrown in later on in the movie and can allude to the dark knights brooding demeanor just fine, thank you.

amy Adams/ Lois Lane - Wow! what a terribly written part for this character...Clueless and painfully unaffected by everything going on around her... I speak for all true Superman fans when I say, Margot Kidder, eat your heart out baby!

An epic superhero film, I love it

If not for BATMAN: THE KILLING JOKE, BATMAN: RETURN OF THE CAPED CRUSADERS, and the recent LEGO BATMAN MOVIE, this would be the BATMAN movie of the year.

A significantly better film in its "Ultimate Edition". Weird use of the IP. Not at all what one likely expected based on the title but if you go into expecting a bit of an art house drama it is very entertaining.

Best Batman ever. Lots of action and fun

Was going to rate it 4 stars until that ridiculous battle between Superman and Batman where Superman wounds up being thrown around like a rag doll and looks very mortal. What happened to the man of steel who is supposedly faster than a speeding bullet , more powerful than a locomotive , and who earlier destroyed the batmobile? Also, why was it necessary near the end of the movie to have such a gigantic creature battling the super heroes ? Very disappointed how the movie ended. Otherwise , I liked the show and thought that Ben Affleck did well as Batman.

It was ok. Not the best, still worth your money. Go watch it. The movie is very dark. The fighting scenes were very short.

I am so glad I saw this movie at the cheap theatre. It had too many past life episodes, too many reflective periods. This movie could have been an hour shorter.

"Why did you say Martha?"

So bad. Superman can't get out of 10' of water with the staff, but he can pick it up and fly 1/4 of a mile with it in his hand. Worst movie I've seen in 5 years. When Batman shot him with the gas bombs, Superman, with his super speed could have easily got out of the way or used his breath to blow it away. So many more.

So, basically, I didn't like Dawn Of Justice because as a comic book fan, it didn't relate to the comics. Also, BATMAN DON'T USE NO GUNS Y'ALL.

Terrible. Very disconnected. The writing was bad, the editing was bad. I don't even know if the acting was bad because there wasn't much the actors could do with all the randomness. It was basically a set up for sequels.

It would've been 5 stars if Jesse Eisenberg wasn't in it. Worst portrayal of Luthor and/or any villian in a superhero movie.

Worst movie I have ever seen in theatres. I wanted to walk out, but my party wouldn't leave with me.

Affleck.. Awesome, Gadot..Great, Cavill..Good, Eisenberg? What in the hell. Horrible. Worst casting ever.

Astounding!! A visual feast for all movie goers. The plot was well developed as were the characters. This is my new favourite superhero movie. Full of quality and epic entertainment. 5 Stars.

The acting was very good, the special effects were awesome & I guess the directing was OK, but the script was terrible. They could have made 2 movies out of this mess.

This is the worst Batman Movie of all time, hard to follow and very disappointing. I should have played a 5 game pro line instead.

This movie was so well directed that you need to see this movie several times just to catch what you didn't see the first two times. This is also the movies downfall, because of the AMOUNT OF DETAIL in this movie. Most movie goers' unfortunately these days don't have the sophistication to catch the finer details. But having said that this movie offers alot of UPS and downs, unfortunately to many downs for most movie goers' which is unfortunately has cost such a well made movie have so many poor reviews. If you like a really well directed movie this is the movie to go see over and over again. I firmly give tho movie 5 stars. 😊

Horrible movie in every way. Plot don't make sense, bad acting, just horrible please trust me. For example, (spoiler) after fuming the whole movie (2 hours worth), batman finally decides not to kill superman because (get this) their mothers have the same name..after that they are all buddy buddy. Just ridiculous.

Batman is Awesome! Wonder Woman is Amazing! Superman is simply Incredible!! This movie is just Astounding!! Great action sequences, stupendous story, great build up, and the easter eggs of future DC movies are just Neverending!!! This movie is simply one of the very Best!