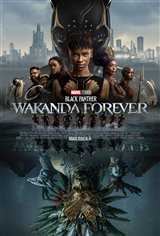 One of the best Marvel movies todate. Excellent tribute to Chadwick Bosenan and a great bridge to the next Black Panther story.

It would have been better if there was a story involved...

It is a great movie! Enjoyed every bit. Don't know why some reviews are so negative.

I liked Chad Boseman, and I think the movie does a good job saying farewell to him but otherwise, this movie is a disaster. It seems rife with cultural stereotypes and it's totally unclear why the underwater Hispanic are fighting the African super heroes. This movie is a muddled disaster; it's too long and it's terrible.

There is no main character to anchor the plot. Without that the movie is just a series of skits. Another woke Disney product at the cost of a possibly good movie. I am beginning to think there are no good women writers, directors, producers or actresses left making movies.

Loved it great movie I seen it 2x.

Excellent written movie, great acting, loved the wardrobe, great special effects, great messaging for people of color. Would have loved to see the Princess and the King of the water world combine their kingdoms through peaceful negotiations or marriage . Would have loved to see a storyline challenge for the new King of Wakanda. Will go to see it again.

Much respect to the writers of this movie.R I H CHADWICK.. When I 1st learned of Wakanda Forever, I said we all knew that MB Jordan was a no return(death n 1) I felt that it should be & why not the next Panther should be a WOMAN!!NO racism of being to blk or wht

Multiple reasons why this is possibly the worst MCU movie yet. Firstly, zero story and plot it - clearly this was just meant as a vehicle to give a very one-sided view on what YOUR morals should be. Next, the whole "if-you-aren't-with-us-you're-against-us" vibe - seriously, enough already, just let super heroes be super heroes regardless of race, sex, whatever. Too much cgi action. Also, Disney, stop moralizing for the masses - make movies of ALL kinds and let US decide what is right from now on, ok? Seriously, it's as is Disney is trying to race DC to the bottom in terms of superhero failure.

Good plot and story. Anyone that thumbs down this movie for being unrealistic should have known that it is a Marvell creation and science fiction is what they do. Very entertaining movie.

This is an AMAZING MOVIE! They put there all into this and it shows.No racism towards white people (and I’m saying this as a white person). Overall amazing movie. Even better then the first movie which is even hard to beat.

The 'forever' part of the title is apt, as this is interminable. I agree that Cannibal Holocaust was much better. So was Jenna Jameson's Hell on Heels. That's a really good one!

Everything. Great tribute to the fallen King.

AWSOME movie and suri is so cool in the movie.

This was wholly unbelievable that women fight men without breaking anything. It’s too bad that strong woman no longer means one who challenges and sacrifices for what she believes nor works along side men instead of enjoying a false superiority. I did enjoy the anti-immigration standpoint as okay from a black nation, letting us know that white people should be glad to take on the burdens of the world.

Movie was lame. I agree with the earlier poster that people should be able to say they don't like this without being smeared as racists, yet the libelous review remains posted. Tribute.ca should be deeply ashamed for leaving this hatred up.

Well, that should've been expected with all this "BLACK,BLACK BLACK!!" bullcrap Movie is boring, poor acting It's not enough to be black. If you an actor, you need to act.

Boring, same ol' same ol', with a heavy dose of preachy wokeness. I left halfway through.

It appears to be a "women empowerment" film, with most of the villains as men. Most of the fans of super hero films are younger men, yet this film appears to be made for women. We all want to see a film where men get a kick in the nuts. Ya... Not! No good story and not engaging. Nice film to see if you just want pretty pictures.

An “ Avatar” wannabe movie. Very hard to follow the story line and purpose of the reason for being. Graphics were great though, I’ll admit. Basically a waste of time. I should have stayed home and watched CNN.

The plot drifts with this disjointed movie. I found it long and unsatisfying. The only Marvel movie where I couldn't wait for it to be over. It's not horrible but I wouldn't rush to the theater to see it. The costumes are excellent and the special effects are worthwhile. Too bad the writing and the story are so mediocre.

Let this stupid superhero genre die already... The w0keness makes it even worse.

At LEAST there's some BLACK FOLK in it! Maybe I'm just getting Tired...all these 'Advanced Races' and their superpowers and advanced TECHNOLOGY......so WHY ALL the FIGHTING??? IT NEVER SEEMS to END!! Can't we think of Something Else to DO- to Improve, or Protect the Planet? Or Space? Rather than advanced colonialism and urge to Conquer? Maybe find out WHY we're all HERE Instead??? I know, I'm just pipe dreaming. I guess.

The story’s not interesting

It was just bad bad bad. The comics were kinda terrible too.

Those who didn't like it should have stayed at home and watched your tv!!!!! They didn't beg you to come.

One Mary Shuri wasn´t enough, they had to basically clone her in the form of the other supergenius girl who is the key to everything. Namor with his funny, tiny wings on his ancles is ridiculous. It´s accurate to the comics but it doesn´t translate well into live action. The real Black Panther isn´t even in the movie and died of screen. The actor died and that´s not the film-makers´ fault, but couldn´t they at least let him die in some epic fight in his costume without showing his face and use a stuntman? And racism towards ANY RACE is wrong. Any race including whites.

White people are bad, black women are strong and smart. Plus some action in between

I thoroughly enjoyed the movie from start to finish. It’s action packed. The actors/actresses did a marvelous job of acting their roles. If you liked Black Panther, you will love this movie.

Great movie well done tribute to the king Chadwick he will be sadly missed as the black panther, the visual effects were amazing nice introduction to new characters, Marvel did a great job with action and fight scenes as we move on peace on earth is much better than killing each other just saying. Marvel rocks Wakanda Forever is A+ one of the best movie bring on part 3.

ALL CAST MEMBERS SHOULD HAVE BEEN BLACK. CAN'T YOU PRODUCE A MOVIE WITH ALL BLACK CHARACTERS AS YOU DID IN THE FIRST MOVIE?