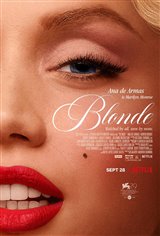 No idea why this was made, miserable and nasty,

One of the year's ten best.

Bleak. Hollow. Soulless. A truly difficult film to watch. Its morbid tone leaves you feeling uneasy with graphic sexual violence and abusive nature. Marilyn Monroe’s story needed to be told with heart and understanding of who this woman was during her time on and off camera. Marilyn is represented as a shadow figure against bright lights and glitter, without a trace of her real struggle to find redemption as a human, with a troubled past. It’s a damned shame and missed opportunity for something really great. 1 star.

I will rate it first,,,,, two stars out of five.....7 out of 10, for people willing to see it beware it a hard watch at times with a disgusting thing that Marilyn Monroe does to JFK, and the actress is topless to much that it become very much pointless and that a shame because Ana de Armas steal the show as she is worthy of Oscar nod and i think she should win, others actors were good in the film and the artistly element keep u watching from sound,editing and cinemaphotography, if it didn't have pointless nudity,disturbing and disgusting parts then i would give it a four star, the Director Andrew Dominik does a disservice to Marilyn and the actress playing her and that a shame because alot of people will be turn off from this movie