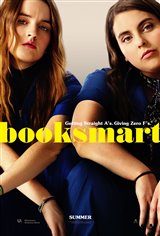 Hilarious, surprisingly touching and real. Not meant for small children, but teens and adults will have a great time! Don’t pay attention to these other reviews that were obviously written by the same humourless, homophobic and narrow minded viewer...

Not smart. Too crass in a lazy way. It fell totally flat.

Coarse, vulgar, tasteless, and worst of all, not funny.

Went to see it as my adult boys wanted to go .Did not read up enough on it aside for one review on it that was decent . Expected it to perhaps be more like Lady Bird . Soon as this movie started , realized I made a big mistake after all of the F bombs and crude sexual references a few minutes in. Then there were the lesbian references and sex scene that were totally unnecessary as well as substance use. While there were some funny moments, hardly made up for the crudeness . If this is comedy, the joke is on the people who like seeing this stuff . Do not waste your time and money and stay away unless your mind is in the gutter.

Funny, smart, awkward...spot-on reflection of teenage years. A little over-the-top with foul language, especially at the beginning. But I wonder if anyone would be saying anything about it if this were yet ANOTHER coming-of-age flick focused on boys/men?

This was one of the worst movies I have seen. MORE than half of the people left before the end of the movie. I waited until the end HOPING it might redeem itself. No luck!

Who is Violet and why is she running?

THE TRAILER IS PATHETIC

I loved it. It was funny to me.

I walked out after the first 25 mins or so. Not funny. Too predictable. Wanted to like it, but couldn't :(

This a very cool, hip,dialed in hilarious movie. It pokes fun at a lot of the stereotypes in the high school genre. One needs to have even a slight sense of humor to understand it. The actors, director and screenplay should be Oscar candidates

So horrible, we word out after thirty minutes.

Loved the movie very funny! If you aren't into vulgar language etc. you should not see it, rough comedies are exactly what I like the most though so I loved it alot! Can't wait to watch it again when it gets released on blu-ray

I love a good laugh, this time the laugh was on me. having paid to see such a disaster movie, if it was on TV I would have broken the TV .The best part of this movie was the popcorn and soda.

This was quite possibly the worst movie I've paid for! To sum it up a total girl super bad ripoff! And i mean TOTAL. not an original idea concept or line it! Besides that the acting sucked as well as the cliche ridden dialog. It makes sense the heavy girl was jonah hill(feldstien) sister. She should be ashamed and ridiculed for this. Nepotism at its finest. And the fact it took FOUR people to "write"this is laughable. Only made worse by the fact it was four women makes it so much more offensive! PURE GARBAGE. if you like this movie. You should end your life. Because your mind is obsolete 😑

Language was horrible, f bombs all throughout movie .Worst movie of summer.

Saw this with a friend from work, after the show we went to see turned out to not be playing. We made a quick pick from the available shows thinking it was probably a funny/clever coming of age movie. After only a few mins into it we discovered why this was R rated. Foul Language, and not just a little. There was an incessant use of the F word. I gave it at least one star as I did have a few laughs, but after the movie my friend said she felt like she owed me an apology for suggesting the film. We noticed that everyone that was in the theatre when we arrived were gone before the show was over, all three of them. We laughed on the way out as we noticed there were two employees waiting to tidy the theatre. We made mention that it would be the easiest clean up ever since we had never seen a theatre so empty. We were definitely not the target audience for this film.

I don't understand why people who are religious or easily offended expect to enjoy comedy, which typically prophanes anything sacred. If you like comedy that subverts the status quo, then this is hilarious. If not, go find some stale romantic comedy.

Why did Olivia Wilde choose to direct this piece of trash? Brings her down in my eyes. Won't be looking for her next directorial effort. If anyone allows her to do another one after this atrocity.

The gratuitous foul language in which "f**k" dominates was simply distasteful. It made the characters seem to have limited vocabularies. The portrayal of "party goers" as being just as successful academically as studious students projects a false social message because most students who do excel must study hard to accumulate a record of excellence.

If it was possible to give it a minus star I certainly would. Just can't imagine how anyone could give it more.

Was hoping for a "Lady Bird" or another "Eight Grade". Instead I got a predictable female frick and frack duo who do the usual trite, unimaginative, boring escapades and meet similar stereotypical teen players along the way, all of whom are unfunny because their character's over the top eccentricities are so forced. Wish I hadn't gone. Don't waste your money!

My wife and I got into an argument after seeing this movie as to whether it was the worst or second worst movie we have ever seen. The plot was boring and predictable, the dialogue unpleasant, and there were no laughs to be had, despite being billed as a comedy. It was a disaster.

Probably the worst movie I have had the misfortune to have paid to see. I found it pathetically stupid and disgustingly offensive. Not just my opinion, I spoke to several other patrons after the show and all felt the same way. If you want to waste your money ...go see it.

Filth, filth and filth......can Hollywood no longer make comedies that are actually funny without attacking every sacred thing in this world....asked for our money back after 20 minutes....theatre said that had been happening quite a lot !!!

Very well written, thoughtful coming of age story. Clever dialogue. Great representation of female friendship of which there is such a disparity in movies.

So, so bad. But it was entertaining to see Jonah Hill's twin sister Beanie in it, they look so much alike.