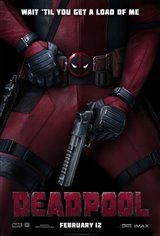 I was surprised how much I loved this film. I didn't expect the character to be portrayed so well. It really felt like Reynolds was Deadpool. Top-notch comedy, and action. LOVED IT!

It tries to be cool so hard it sometimes fails. The other thing that fails is that we don´t have a typical "meet the character(s)" scenes at the beginning. We are thrown into the battle between Deadpool and his enemies, not knowing what´s going on. We feel no connection and sympathy to him. And during the movie I somewhat started to feel empathy towards him only when it was shown how he was tortured and experimented on in the illegal laboratory. However, he wasn´t the good-bad guy of Riddick´s kind, he was simply bad guy who was angry that some other bad guys turned him physically into a monster. His most human moments were when he was in doubts if his girlfriend would want him with his damaged looks but even these moments looked more like him being concerned if he´s still sexy enough to make her horny because their whole "relationship" looked like purely based on sex for the whole time. The last scene showed at least for the woman it wasn´t only about sex. But I have a hard time to believe he would feel the same about her if she was the one physically damaged.

DEADPOOL IS GARBAGE AND RYAN REYNOLD IS A TERRIBLE ACTOR

dead pool is no hero and not even better than the villains he kills as the charter is totally not likable and u don't care if he lives or end up the same fate of his enemy's, then when he get cancer then u should care ????? he reap what he sows and u don't route for him at all, I was curious and bought the dvd to watch it and found it disgusting and insulting with the only upside of the effects, teenage warhead, angel and dead pool outfit with the moments of some cool action but in the end I wont watch again and threw it away....and why o why would fox sign up for this ?????? just other dumb move from the top heads from the studio as they never learn their lesson

Awesome! Loved it.....it's like they made this movie for Ryan Reynolds.

best movie ever made

amazing movie.. Ryan did a fantastic job bring on Deadpool2

not bad but is a bit too violent, not for people sensitive to blood.

a nice change from the seriousness of other movies

I thoroughly enjoyed this film and thought it was hilarious!

The best movie i've ever seen only thing that may top it will be Deadpool 2.

One of the most refreshing movies I have seen in years. I am not a fan of super hero movies so was somewhat hesitant to see this one. This sets super hero movies apart. Great acting and an outstanding script. Loved it. I hope a part 2 is made...

I loved this movie. Lots of action & also comedy. Ryan Reynolds was awesome.

Deadpool is Dead On! If you're going in expecting an academy award winner than you don't know who Deadpool is. If you want a phenomenal action movie with one of the best comedic actors out there then you will LOVE this movie just as much as I did. Enjoy!

Great movie!! Saw it 5 times!! sadly very few people other than comic fanatics might enjoy it

Completely original and nice to see a fresh take on a (non) superhero movie. Actually went home and played the game over

AWESOME and early Jim Carrey funny too! Love it!

The movie was great!!!! Can't wait for it to come out on DVD.

I thought everything is worth seeing

It was awesome, I could of laughed all throughout the movie, oh ya, I did.

Wow! They turned a comic book into a sophisticated, and entertaining comedy.

So much fun!!! I'd watch it again and again.

At least the girl was cute...

So adding this to the family movie library when it hits dvd! Great!

Took the entire family and had a blast!

Loved it! Ryan at his best!

So funny. I'd watch it again. Don't bring your kiddies.

Ryan Reynolds ROCKS!!! Loved it - going to see it again, you will be laughing out loud

I'm going to watch it again. Love! But don't take your kids.