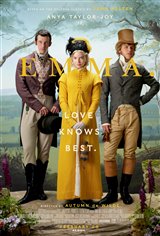 Fantastic adaptation and great chemistry between the two leads. Emma is a beautiful movie.

Much better than the other version. Anya Taylor-Joy is the perfect Emma.

Much better than the 1996 version. Very believable, excellent actors. Jane Austin would love this movie.

Jane Austin would cry if she saw what was done to her novel.

It’s fun for all the Bronte lovers. The costumes and cinematography were excellent. It wasn’t a complete copy of the earlier version released with Paltrow as its star so I found it delightful.

Funny, but sad at the same time. I like how Emma is shown to be a really horrible person when she insults the older lady. The whole audience gasped at how rude she was.

Lead actress playing Emma looked and behaved like an alien. Neighbor guy wasn't attracted to her in the least. Or she to him. No chemistry. Poor best friend also seemed crazy, though she was the most likable because she smiled a lot.

I am not sure what this was suppose to be - I was never convinced the time was anything like what I was seeing and was left confused what the point of the film was. The film tried desperately to be funny but it fell flat on the premise of being a film about how funny rich white folk were in England two centuries ago.

A feast for the eyeballs!!!! It moves a bit slowly in parts, but that allows more time to admire the gorgeous look of the film.

Very visually beautiful film, but poorly directed in terms of creating a clever cohesive story, the two leads had very little chemistry, In the end I did not care about anyone.