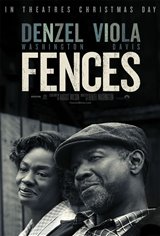 To much use of the "N" word. This is the wordiest movie I ever seen. Didn't finish watching.

Denzel is the reason I went to see this movie. The acting was good but too much talk, it dragged on and on. The movie got heavy, too much monologue.

To much talk talk left after first 1/2 hr???Always referred to the devil... What a waste of a good coupon...

Excellent movie. The writing is superb. Each character has depth, a history you learn about or see playing out as the movie goes on (I almost said play, it feels like a play). And you care about each character. This movie touches the heart and will make you think, reflect, perhaps about your own family history or (U.S.) history in general.

Such an amazing impacting inspiring film

Great actors and acting. This was how it was - realistic and sad.

This is a play on screen. It unfolds and plays out like a play. Having seen it on stage it was easy to appreciate it on screen. In this day of short attention spans and high velocity film, it may be diffucult for many to appreciate more cerebral films such as this one. It should not be assumed, as us often depicted in the visual media that poor or low income class live in dirty enviroments, have unkemp clothing or have the inability to maintain good hygiene. I know many poor people with beautiful teeth. It is in fact an excellent film opening the window to the struggles if the poor, and even moreso to the unique issues that face the poor of color. I have seen it three times, taken my grandchildren because it is a RARE film that does not depict the living environment as a drug, gang and immoral infested ghetto riddled with violence.

Ridiculous...Over and over the same dialogue and a sanitation worker with the best teeth I ever saw. Make them realistic for the craft. I couldn't wait for the end nor could the others in the theater. Who is giving this good reviews? I think a bogeyman.

What a good movie...excellent acting by all...

He was very hard on one son and the other son was always coming around when money was involved. There were only 3 scenes they kept showing, him leaving work, in the back yard and in the house. Viola spent a lot of time at the church and Denzel spent a lot of time at the bar. They never spent time together. He was always talking about sex. I'm shocked he had time to have sex with Viola, since he was cheating. He was such a big man when it came to talking his son, but he was a punk when it came to telling Viola about his affair. After he passed away, everyone looked like they got younger.

The acting was great, but it was too sad and dark for me. I ended up really disliking it.

Well acted but gave impression of stage play - on film.

Great acting, real story, much to think about.

Sadly just a story of a mean old man. Struggled to think of the key point it was trying to share.

Denzel's acting and directing are stellar, but Viola Davis is a revelation. Definitely deserving of some Oscar gold! Nice to finally see a film adaptation of August Wilson's stage masterpiece. This is to African American drama what Death of a Salesman is to middle class 1950s American tragedy. Not to be missed.

Boring, to much dialog.

Amazing story- acting was better than Oscar nominations. Probably the most. Amazing acting by Denzel. All his movies havbeen phenomenal but this one was up there for his best !!! Had every emotion one could possibly experience. See it &. Enjoy!!!

This movie was a perfect depiction of the relationship between a frustrated husband and a relatively obedient wife in the 1950's. It also depicted how this frustrated father did not allow his son to succeed in sports because he did not succeed in sports and he did not want his son to best him. In order for the son to succeed in life, he joined the military, which was the only avenue that he saw to get out from his fathers control. In the meantime, the wife was directed to raise the illegitimate daughter of her husbands deceased mistress. What a tangled web we weave.

The way this story was told, it allowed us to enter the lives of Troy and Rose which enabled us to feel the emotions both of these characters' felt during their life together. Outstanding performances by both of these actors.

This was a a powerful movie that remained true to August Wilson's vision and story-telling. Both Denzel and Violet were at their zenith professionally. Some people have said it moved too slow. I disagree. The slowness allows you to enter the mundane reality of these people's lives; to see them for who they really are. We have become so action-oriented that we cannot just be still long enough to invest in people or events. Fences is outstanding!

It was a great joy to see Fences. The acting, from even the minor characters, was both believable and touching. The movie was an insight into a black family some 50 years ago, something I do not recall being done often before and thus we found it very interesting. The movie was maybe 20 minutes too long and there was a slow part near the middle that did not seem to add much to the movie but on the whole it was well worth watching. I did cry at the ending, a bit hokey perhaps but I enjoyed it. Thanks for the opportunity to see Fences.

Of course, great acting. The acting was amazing. However, it was very slow and hard to sit through. I think it is more of a play than a film/movie.

It was way over rated. I didn't like it . The actors were great but the movie wasn't that great at all it should've went straight to red box in my opinion.

It was a very good movie. Denzel Washington was excellent as always, as an actor and as a director. Also Viola Davis was also excellent. It is important to keep in mind those events, it is part of history. Thank you again for the opportunity!

Lots of depth and displays of the human struggle.

Acting in initial scenes was definitely ACTING, unconvincing. Main character was so self absorbed, mean and abusive that not even a miniscule amount of sympathy for him was impossible. Even when he shared his story of his childhood, it came across as self-pity with no redeeming grace. Maybe that was intentional, but nonetheless it left us unimpressed.

Pretty far fetched. I found many of the scenes hard to believe. For example, if she was such a genesis, why was she dismissed from the team? And the scene where all of the women walked over to the computer room and took over was ridiculous.

I loved the movie Fences. The cast was great and they all did justice to their roles. My friend felt it was more of a play than a movie as 90% of the movie took place in one house. Whichever way you see it, it is still a great, emotional and heartfelt movie. You will smile laugh and cry in this movie.

While a bit slow to start, the movie was one that left me reflecting hours after I left the theatre. Denzel Washington and Viola Davis demonstrated great range and skill in bringing their characters to life. While the movie was set in the fifties, the theme of a man just trying to make an honest living, is timeless. A must-see movie!

This movie was adapted from a stage play starring Denzel Washington and I thought this was quite apparent through the film. The acting was wonderful...very intense and so was the storyline, which mixed issues of race, fidelity, friendship, family, struggling to survive, pride and devotion to work. But limiting the locations as they would be in a stage play, and having so much dialogue made it drag at times..I just found the movie too long.

Denzel Washington gives a remarkably powerful performance in this movie. The film itself was very accurate for the time period that the story takes place in. I like the fact that it didn't necessarily focus on racial issues, but everyday issues that people who are married struggle with.

Excellent movie that covers this time in history. Denzel Washington is superb as usual.