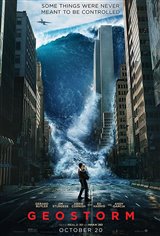 I guess if you want to waste time, it was good to sit and eat popcorn. I was disappointed. It checked off all the boxes for predictability. It was trying to be too much of a mix of the Day After Tomorrow and a who-done-it? and a Sci-Fi/space film. Of course the dad was going to be sacrificing himself to save the planet, but of course that wouldn't actually happen and of course the current captain of the ship was going to be with him right at the moment she would be needed and in her space suit (which btw the clock was at like 2.5mins and he got his whole space suit on and still had 1.5mins to go?!?!?!?!) Of course we are led to believe the other brother's GF/Fiancee might be involved, funny how she is so stern on her secret service duties but the guys says I know thi sis asking too much to do "X" which is completely against any laws and she doesn't even put up an arguement and agrees to it...and does this a few times and each situation is worse than the last!!!!! Strong female character in only the role she played as a Secret Service Agent, otherwise what the bf says, she did without question. I'm sorry I don't see Gerard Butler character as the guy who designed the whole idea and knows it inside and out. He'd be the worlds smartest uber-genius. And really, 17 countries got together and built all that within how long??? Ya right. Some effects were not good. And some were, of course, ironic for the area they were happening...of course desert areas get flooded or instantly frozen and tripical places get the blazing sun.

Good story, like it being on the sci-fi, technology wise... Overal good family movie....

I don’t know who these crazy people are that rated this movie and said it was no good it’s one of the best I’ve ever seen. The acting was superb. The effects were superb. I would give it 100stars if I could And I would also say I need to get some new critics.

Fake looking buildings. B film. B actors. Gerard is still an an A actor though. WHY I STRUGGLED to watch it to the end.

It was okay. The action took very long time to come. This one almost look like a continuation to London Has Fallen. The cast was okay.

totally rubbish,unworthy of the cellulose it`s developed on

Preachy, boring, and been done to death. Left early snuck into another show.

At first I was hesitant to see this movie based on all of the negative reviews but after reading the many positive reviews, I decided to give it a chance (on a Tuesday) and was quite happy I did. Yes, it has its flaws but most films do. I really enjoyed it.

Wow...this movie really sucks. This thing stalls along like a Volkswagen diesel ...I couldn't finish it and got my money back. We hacked this thing to death. The best part of this movie is.....going to Tim Hortons after and talking about how bad it really was.

Very enjoyable movie on many levels. Great effects and decent story with quite a bit of humour thrown in.

I liked the presentation and how it approached the 'science' of weather control and the danger that it can be weaponized.

Well crafted and well acted. I'm glad I saw it!

Exciting, lots of action, sci fi, space, romance, politics, it had everything in it. Very entertaining.

This is one of those movies you can watch over an over.

So worth the money to go see it.

I can't wait until it comes out on DVD!

I rate this at 3 1/2 stars. I enjoyed seeing it on the big screen. Enough action but not too much. Not too complicated so it was easy to follow. i liked it.

Ten years ago would have been a good show. Special effects and predictable storyline very outdate. Gerard butler was good but couldn't save this show.

Great cast. Suspension of disbelief impossible. Things that could only have happened over a long period of time happen in minutes or seconds. And none of them was even possible without breaking the laws of physics. Completely uninteresting and totally predictable. No development of plot or characters. Don't waste your money.

very poor acting except for Gerard Butler, but not even he can save the movie

The script left lots to be desired.

Absolutely thrilling! A must in IMAX!

this was an awful movie

I'd rather be watching Mariah's World.

No Oscar winner but ,not a bad movie . Lots of laughable Hollywood type stuff like people out running deadly storms and getting out of the way of explosions in the nick of time . Saw it on the IMAX in 3D ,and the special effects were pretty cool .

The script left lots to be desired.

Very intense, good special effects, and they even threw in a positive message...not a masterpiece but worth the watch.

A passable plot. Good acting and Ed Harris is nasty as usual. A fine date movie with the spouse. And great special effects. What more can you ask for?

Good one that you should watch.

It’s was ok dragged on a bit too long. But the concept was very good and Gerard Butler was amazing in the film - his performance saved the movie