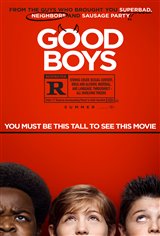 I loved it super funny

I LIKE IT, YES, I DID.!! I wanted to See a Movie, with a Little Bit of Humor & See HOW these, 3 Young Boys would Act, in a complicated Movie & this was Exactly what I got. The Three Young Actors tried to be very Good, at the job of Playing, their roles.!! If anyone thinks, it is easy about doing a Movie, on 5th-grade to 6th-grade, Aged Boys Today was Easy, then, THEY are definitely WRONG.!! The Rated '' R '' had to be Applied, because, of the Stupid Swearing Words plus, the porn Item Props had to be Considered too. All the Young Lady Adult's behind me sure did LAUGH UP a Storm, over what was on the Screen & what They thought of the Boy's Acting. Yes, sure the Plot wasn't that Good, but, somehow, the Movie all came TOGETHER & the Ending of the Movie was really pretty NICE.!!

Not worth your time. Poor acting and story.

Sophomoric would giving this movie too much gravitas. It's a movie about 6th graders who want to learn how to kiss. There is virtually no plot, no point. It is rated R for language and the occasional sex toy. I went with a friend but if had just been me I would have left and caught an early dinner. It will be on TBS soon enough. Watch it over your shoulder while doing the dishes. That would be plenty.

Funny film but hopefully next time they will find better actors to play alongside Jacob Tremblay - especially the kid who looks like an evil version of Gary Coleman. Pushing limits is what makes this film funny but the pushing limits in the language area was not the best way to go as it was like a joke told too many times. Fortunately, there will be a chance for them to get it right as a sequel is on the way. 7th grade will certaintly be better than 6th grade next time around.

Why would anyone allow children to play in a R rated movie that are not even old enough to go see it after it's done.. Just sexual exploration of children

Don’t bother. As another said.... its a movie about 12yr. Olds but they can’t and shouldn’t see it. Pretty bad taste. Hope Jacob Tremblay can find better scripts in the future cause he’s too good for this kind of film. Hollywood has missed a fabulous opportunity to showcase good child actors.. where are the good writers ???

Nothing funny whatsoever about 6th graders talking and acting this way. Something is so foul about a movie that little kids can act in but aren't allowed to actually go see in a theater in person. (R-Rating). You know that kids are for sure gonna go see this because it is a movie about kids their age. We are dropping the ball on parenting and don't even know it, if this is considered funny or entertainment. I protest this movie values.

The most controversial film of the Summer and the second biggest box office hit. Love it or hate it it is a window into the world of 6th grade in 2019 America. This is not the America where most of us grew up in - in this comedy it is a multi-cultural world of drones, potheads, bad language and the kids are a night mare from the 1930's 30 rascals to the lost boys of 2019. Even the look is kind of creepy with mean Gary Coleman character leering back at you and yet, strangely enough it works at times and you can't help but keep watching. This film is just too raw to be reviewed in 2019. It will have to be set aside a decade or so to truly rate it. When the Bad News Bears came out in the 70's many people were horrified but by the 80's it was truly beloved. Expect people to be firmly divided on this picture which is it's draw- people want to see the film that is either getting the 4 stars or the 1 star. The controversy could have only been greater if these actors were retelling The Rocky Horror Picture Show.

I left the movie around an hour into it for too many reasons to list here. Young kids constant swearing ... degenerate parents who leave a sex doll and sex toys where the kids have access to them ... date rape drugs ... crossing traffic across the busiest freeways .... on and on .... really perverted and sick.

Best comedy / adventure movie I've saw in years. Yes, it DOES have a storyline and flows quite well. And yes, boys this age DO swear when not around their parents, just like in this movie. If you can't laugh, then don't go see this movie. If you want a good laugh, which most of us could use, it's a must see! For the critics: No, these kids aren't continually dropping f bombs. This movie's rated R for some of the adult props used, not a f bomb here or there. And at least the kids in this movie are riding bikes and moving, not just sitting at home playing video games, visiting social media, youtubing, or texting. That would be a boring but true movie of today's youth.

I absolutely hated every single thing about this movie. From young boys dropping the F bomb every 20 seconds to the poor acting, it was atrocious. The very sad scenario of having garbage movies such as this is that eventually, it will be available for kids to somehow watch. Even though it's R rated, they will somehow see it. We wanted to leave, but thought it would surely get better. We also wanted to give it a fair review. It just kept getting worse. I would give it a minus 10 if it was an option.

This brings back so many memories of school! They got it EXACTLY right!

Remarkably, what hurt this film the most was language. I recall being in 7th grade and we did use crude language but not to this degree. The overuse of the bad language became a crutch where funnier humor could have been tried as situational comedy during these years would be easy to come by. This film could have been a Summer five star blockbuster if more cleverly done. Real boys at this age doing things that real boys do at this age would be comedy enough - one doesn't need an elaborate construction. Finally, casting was poor. Tremblay was ok but his sidekicks were terrible especially the one kid who looked like an evil version of Gary Coleman - what a disaster in that choice.

No child actor should be subject to the type of vocabulary used in this film. The producer, writers and director should be held accountable.

it was ok but not great

Great movie. Probably gonna buy it when it comes out. Might go see it again.

This movie wasn’t as funny as I thought it would be. A few good moments.

Pretty simple looking at the ratings...you will either love it or hate it. I did not like it nor would I recommend it...especially to non adults.

Very good movie; but too much cussing. Kids, believe it or not don’t cuss that much:

Excellent! Brought back memories! Lots to laugh about.

Not as funny as we thought it would be.

Funny but the film would have been better with different casting. Tremblay was good but the two other kids on screen ruined the film. The bad language was overdone and should have been used as a comic element to get laughs but when done over and over again it wasen't funny any more than telling the same joke over and over. Thematic elements could have been better and more comical. Still, I had to give the film 4 stars as it was something new and reminded me of the comic years of being 7th grade divided between living in a world of adults as a little angel and being pretty bad when just with my friends. This film is screaming for a sequel- hopefully with Tremblay without his second rates.

The movie was a comedy more than a back to memory lane. R rated, due to the cursing. I believe it would have been a pg-13 if cursing was toned back some. I felt too old for the movie but kids of the same age as the actors would feel too young for this movie due to the adult content presented. That being said had several outbursts of laughter and one "Oh s*&t" by some of the parenting language.

So, I would not recommend it...especially don't bring your children. If any of the makers and producers are having problems with kids who are wise ass loudmouths I think I could give them some parenting ideas as in watch your movie.

Worst movie I have seen in a long time. Don’t waste your time or money... unless you enjoy boys using the F word non stop and god dammit! Stupid movie ...

I see this movie is #2 and sadly or gladly it could have made $millions more if it were not for somebody thinking we would all be ecstatic to see pre teen boys with foul mouths. Somebody in production should be reprimanded because they lost a lot of money for whatever their point was.Some people will cringe at parts of this movie.Not cool.

Had some potential but could not handle the language from such young kids. May be alright from hard core uneducated labours but to allow you kid in the was discussing. The tremblay's in particular must not have read the script or willing to do anything with their kids to be accepted in Holywood

I have to admit, I am a South Park fan, even at my age ( 69 ). I get the humour. This movie had some funny moments, but I think they were a little slow in coming. Also, I found the parts that were suppose to be touching, a little weird, because I didn't think any kid who could swear like a sailor could also be sensitive. This is not " Gone With The Wind ", but if you are 14 years old or like me, still feel 14 years old, you might like this movie, but don't take your Grandmother. I wish the kids had a little more interaction with the adults, because when they did, it was funny. It is hard for 3 young boys to carry a whole movie, but If you leave your brains at the door and just go to have a crude laugh, then I guess this is the movie for you.

I am so outdated as I foolishly thought there were some standards or rules that would preclude young children from cursing on the movie set for public filming. Keep your kids home if you don't want them being cool and cute throwing the f... bombs to act "adult."