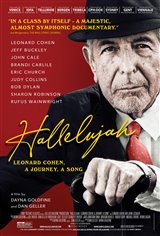 A genius and a phenomenal talent. There is a reason his music lives on!!! The film captures the complexities of the man, demons and all!!!

Lame documentary about one of the most overpraised songs ever, and one of the worst. As if the original by spoken word artist Leonard Cohen wasn't bad enough, this atrocity has been covered hundreds of times. If you are a musician and you're thinking of covering this song then you should just throw yourself under a train, you hack.

For Brandi Carlile to talk about how she was able to reconcile her spirituality with her sexuality as a lesbian through the song was an obvious standout, or Eric Church, a country singer who isn’t normally associated with Leonard Cohen, covering the song and spontaneously performing it at Red Rocks. While the interviews prove to an entertaining story, they also illuminated something deeper about the song itself and about the man who wrote it. The film wants to capture the complexities of Leonard without taking an easy course with his life. It’s more about the twinning of the life and the song. There are 600-800 versions of 'Hallelujah' that exist in the world today. Obviously we're going to go with the linchpins in the trajectory of the song’s history, Bob Dylan, John Cale, Jeff Buckley. We find ourselves needing to expand the film’s reach to include many of Leonard’s intimates, those who served as his emotional and spiritual counselors, as well as his intellectual sparring partners. These people speak in depth and with firsthand knowledge about Cohen’s lifelong focus on the purpose and sanctity of the human condition. The exploration of 'Hallelujah' allowed many women to reconcile their Christian faith with her lesbian sexuality. The documentary wants yo give voice to the deepest questions about faith, belief, skepticism and the psychological and religious constructs that serve to both support and obstruct us throughout our lives. The story not feels always unified and cohesive. The documentary let audience members come to their own conclusions, or lack of conclusions, in terms of the meaning of the song. Our own interpretation of the song changes with our mood, or our day, or the time in our life. (2,5) Written by Gregory Mann