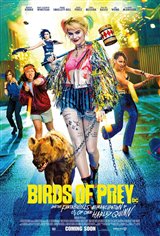 like others have said how can anyone rate this 5 stars ????

In a word AWFUL

Bad beyond words. Yet another stinker about man-haters

This movie needed Anne Hathaway in her catsuit.

The best DC movie yet.

Why are there so many 5 star reviews??? This movie was total garbage. Worst film to date made by dc. What a waste of money

Omg the best movie this year loved it great plot!!!!!!

Okay plot, fair humour, colourful, silly, violent; it was a fun movie. The Birds of prey comic origins changed but it would have fit in with any Harley Quinn comic out there.

The plot was alright, the humour was fairly funny and thankfully Harley isn’t so much the “quirky”, “edgy” girl she was in Suicide Squad. You can tell Robbie got into the role. To the Birds of Prey comic origins, it didn’t stay true but in terms of a Harley Quinn comic, it was a near perfect rendition. Don’t know where everyone got the “hating men” thing, you would have to be INCREDIBLY sensitive to think those few jokes had any political or truthful stance LOL. All in all; It’s quite enjoyable if you’re a fan of Harley and/or her comics.

Fun and silly, lots of action and violence. Feels like a true Harley comic :))

DUMB COMIC MOVIE , doesn't even follow the comic book . I guess if you put flash and jingle on screen sheepel will flock to waste their money . find some other movie to waste it on.

A terribly lame movie and a sequel that nobody wanted is just another platform for imbecilic Hollywood feminism; and feminism is just politicized man-blaming. A movie by and for unthinking morons.

most fun I've had at a movie theater! it's smart, stylish, funny, & it has amazing characters & amazing action sequences!

We want to see strong women out there who aren’t in skin-tight clothes. Bring us strong women who look like US!! All shapes, all sizes, not airbrushed, push-up bra’d and more Real diversity!!

I had to sit through this for about two hours? The plot did not make any sense and the scenes did not have any sequence. I want my money back.

Hollywood is so out of touch. Is this what women want? Do they agree with this movie? I don't think so, other than some of the fanatical academic types. I don't think the typical woman hates men. Ewen Macgregor said this is a feminist movie in interviews. They marketed it as one.... but is it really hat women want, or is Hollywood out of touch?

Typical Harley Quinn movie. My only complaint was the theater had the volume to high which I feel is a distraction.

she is funny an outrageous an you dont have alot of action movies with women as the lead yea!

Preteen humour not really adult humour. Could have been made better.

Don’t waist your money go to Sonic! Other then underdressed women then movie sucks! Acting is nothing like suicide squad harley

No joker at all. And the acting is nothing like suicide squad.!

Suicide squad was way better. I couldn’t wait for the movie to end, waist of money

I didn’t see the joker. I didn’t read the comic. But I quite like this movie! Harley Quinn was bizarre and it’s so funny. The action sequences were great. I think this is the best way to see this movie… Unknowing of anything. So funny!,

I agree with every bad review about this movie!!! It started out not too bad but went spiraling down after the first 1/2 into the movie! I did not enjoy it at all!! I like many movie goers loved Harley Quinn in Suicide Squad by far it was SO MUCH BETTER!! It showed her quirky craziness in a good way. This movie robbed Robbie who played Harley of having a good movie with her in the main role!! How sad! I could not wait until it was over to be honest and I love these types of movies but this one. NOT!!

Even better than Suicide Squad!

The movie was so bad... The theater was empty and not one person ever laughed. The constant male bashing and women defying all odds. Kinda got old. Was the worst hour and 40 minute. Never have I wished the movie would wrap up so that I could leave. Others walked out in mid movie. Those saying it was a good representation of the comic don't read comics.

silliness for pre teens , that's all.

if you love this movie you would probably enjoy the blinking lights of a slot machine . doesn't follow the comic.

Nothing like the comic book, waste of time know matter how they hype reviews,

Sexy comic book fun! Was rooting for Harley all the way!