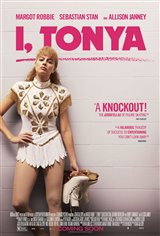 I wasn't sure I'd like it but I was really impressed. Seriously a great movie, funny and totally messed up.

Great movie. Fast paced, well shot, the cutaways and 4 wall stuff is seamlesss and not overdone. Cast is solid.

All the main actors did a phenomenal job. I was a lot more sympathetic towards Tonya Harding.

Aside for the crude language, a very good, well done, and quite funny film. Many good songs from the `70 s and `80 s. Margot Robbie was terrific as Tonya , as was the skating. Loved the interviews of the people who recalled the events . I remember what a big story this was when it happened in 1994. This film captured it very well . One of my favorite films of 2017 along with Molly`s Game .

Excellent movie if I could I would give it a 10

Meh. I don't think it portrayed Tonya all that realistically. The portrayal of Nancy Kerrigan was a joke. However, I don't think she (Tonya) should have been banned for life for something she didn't do - they had no proof she was involved and in fact it seems it's something she learned after the fact. It's wrong to keep people who were on the periphery of something bad, perpetrated by someone she wasn't even married to at the time, out of a sport they love for life.

Insightful portrait of an American hero.

Extraordinary! it was above my expectations.

Excellent movie and the acting was top notch. It deserves the Oscars it has been nominated for.

Excellent movie. Distressing in some ways, but I recall this story and never really knew the background. Very well done.

Not something I'll watch over and over, but I'm glad I saw it. Unfortunately, I know people like those in Tonya's life. I'm pretty sure they'll hate this movie, but I enjoyed seeing my dysfunctional family/friends/associates/enemies up on the screen.

This was an excellent movie. Those who disliked it did so because they said they didn't like Tonya..... you know what... that just makes it an OSCAR winning picture.... the movie was obviously done extremely well and acted extremely well to have people so against her. IT WAS AMAZING.

Brilliantly acted, especially by Janning and Robbie. The movie's best quality is that it neither glorifies nor demonizes Tonya Harding -- she is merely one player in a complex and rather ugly true-life story about the corruption and hypocrisy that mar most competitive sports. Entertaining as hell.

A celebration of a true American icon.

This was a big disappointment. Save you money and give this one a pass.

Margot Robbie hits it out of the park, playing the foul-mouthed, red-neck iconic star Tonya Harding. Stealing the show with equal performances are Allison Janey as Tonya's horrific, abusive, chain-smoking mother LaVona Golden, Sebastian Stan as Tonya's abusive, weasily b/f Jeff Gilooley, and Paul Hauser as the fat loser Shawn, who ultimately brings the whole house of cards down around their ears as he plays fantasy secret agent. The look, feel, clothes, music is PERFECT in this movie, you really feel back there, hating the trailer park tough of Tonya at first and then cheering for her working woman rage-battle against the hoity-toity rich princess world of competitive skating.

Inspiring story of a courageous woman.

Loved this movie. It is raw and true to the world of figureskating. No one deserves to be treated like Tonya was both on and off the ice. Great interviews that reflect this real life event. Those who under rate this movie do not have a heart.

I have been a figure skater most of my life and this movie is an accurate analysis of how figure skating was is to this day. Really well done Tonya thank you for showing others how this sport is corrupted.

Doesn't worth to watch at all. Left with very violated feelings. It is great, she was band forever from the ice!

After reading some of these reviews I am convinced I went to a different movie. This was OK at best but hardly the vindication and coming back party of Ms Harding that was presented at the Golden Globes. This was a Hollywood version of a weird situation. Save your money and wait for it on TV

This is a fabulous movie! It retells historical events in a factual yet, at times, comic manner. The actors are outstanding and the action sequences are filmed extremely well given that is about figure skating. You really feel that you are on the same ice as Tonya. Obviously, since the movie is about Tonya, they try to portray her in a positive light, but there is just enough coverage to understand why she is such a controversial figure in history. Is she the devious mastermind as the media made her out to be or is she just a victim of circumstance? Watch this movie and you will be able to weight in for yourself after hearing her side of events.

It was an awesome movie absolutely loved it

The movie is based on creative story telling that is interesting and amusing. Olympian and convicted felon Tonya Harding is presented as a sympathetic figure (a female victim of men, of skating community, and the mass media). Much of her treachery was not included in the script; but why let facts get in the way of a good story? The beautiful actress Margot Robbie is great in the part, and does an adequate job of Ms. Harding’s abilities on ice. Thank goodness for computer generated imagery, because NO actress can match Ms Harding’s athleticism. How flattering for Ms. Harding to be portrayed by the winsome Margot Robbie. The best scenes include actress Allison Janney who plays Harding’s mother. Janney must have loved that role; it looked fun and she was terrific.

The skating scenes are brilliant. It's kind of vital in a sports movie to have the athleticism be believable. I bought Stallone as a boxer, but Costner was no golfer. Margot is excellent as redneck figure skater Tonya Harding. Alison Janney is even better as the hard drinking, chain smoking mother. This is a TERRIFIC movie about real events. 94/100 . . . guru bob

Great acting. Would see it again

This movie was entertaining and mostly dark comedy. The acting was excellent.

The sexiest movie of the year!

A crazy true story that didn't need re-telling. The skating was fine, Robbie is convincing in the role. It's a decent movie with Allison Janney deserving the Golden Globe, maybe, and it had a few laughs . But that's about it. I had no sympathy for Harding back when this happened and this movie does not inspire me to change my opinion. These were free tickets so I'm being generous in my rating. Wait for it to come on TV