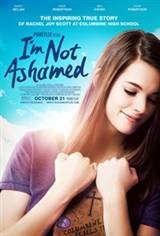 Rest In Peace Eric Harris and Dylan Klebold, two true American heroes who gave people EXACTLY what they deserved! You two are a true inspiration and are forever missed!

This was a really fantastic movie about Rachel Joy Scott she was killed for her belief in god.

The story of Rachel Joy Scott is powerful, inspiring and real. So relative to what youth have been faced with for decades and are still faced with today. A must see for every parent, grandparent, aunt, uncle, educator, pastor, brother, sister and youth of all ages. I applaud director/producers for not trying to portray Rachel as "super human" but staying true to her story. Masey McLain truly died to herself and lived the life of Rachel for all to embrace. What a gift!