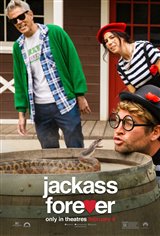 I personally loved this movie it was absolutely hilarious. This movie is made about a bunch of guys that act like idiots for our entertainment, I went to this movie with my mother and we both thought it was hilarious. the cast have disregard for their health.

They really went all out on this movie. I was laughing the whole time. Those idiots that are complaining about the movie can go suck it. What do you expect from a movie that is called Jackass!? I liked that they brought in new people as well as a couple celebrities as well.

if I could, I'd take stars away. wouldn't have bothered, but it was free to see. can't believe anybody wasted their time with this junk. the name sure describes the characters. wish I could unsee it.

If men did not have testicles, this movie could not have been made.

Minus 5 stars. yes its that bad. Stupidity in action. Trash

Quite simply one of the funniest movies ever made. Hopefully they don't make us wait so long for the next one.

I only recall one skit that involved unsuspecting employees at the furniture store. Their reactions made it "okay." All the other vignettes were just among cast members laughing. I really didn't think it was very funny and I was all set to laugh out of my seat. A lot of gross scenes made me wince rather than laugh. A lot of poop, pig-semen eating, and pain without a lot of creativity. I was very disappointed in the movie. I guess the hardcore Jackass fans would love this no matter what they did. I'm amazed anyone would give this more than a star or two.

See it on the biggest screen you can find!

I thought we'd never see another jackass, so my excitement was palpable.

It's the best Jackass ever!

I hope this isn't the final chapter. The characters are really at their best in this installment.