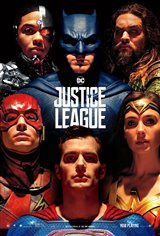 ray fisher is great as cyborg

movie was really good we saw justice league in theaters and loved it. my favorite is wonder woman she is awesome and the other heros are good to.

justice league is the best 2017 movie. ben Affleck henry cavil, gal gadot, ezra miller, Jason momoa and ray fisher all did a great job on their characters batman, superman, wonder woman, the flash, aquaman , and cyborg all come together to fight. they all did great when they stoped Steppenwolf. and the final battle was really good as well.

I really liked the movie, but the villain, rushed plot, and newbie flash all dropped the score by 2 stars.

This movie is only for people with brains

The screenplay was laughably moronic, like it was written by a 12 year old. Straight-up formulaic twaddle, cliches, and loads and loads of just plain dumb stuff.

Not very good but if I was five I'd probably love it.

I took my nephew (in grade 7) to both T R and J L. We both thought Thor Ragnarok was funnier, BUT Justice League was BETTER.

AWESOME. Great to see Flash and Wonder Woman back on the big screen. AWESOME

Rotten tomatoes has this at 38% but this site has it as 66%? Something is wrong here. Apparently, this site has never had a bad movie. You cannot find a single movie that does not score low. they are all academy award winners here. The movie was terrible and I wish I could get that time back.

Thankfully, they've canceled any thought of a sequel. The franchise also canceled the flash movie and the cyborg movie as well. That is how good this movie was. It's as bad as a 15th Transformer installment with Roseanne Barr playing the hero, and Stephen Colbert doing narration. I survived, but the movie is unfortunately etched into my brain. Every bland, droopy, plot missing minute of it.

Movie theaters should be handing out free movie tickets and apologies at the exit. Went to see this expecting a quality movie adhering to the comic books somewhat and was treated with a blandness more representative of the old Gold Key comics. Not recommended.

Marvel fanboys love to trash anything DC that they can hence all the single stars. This was a fun movie. Disregard these reviews and watch it with a clean slate. You won't be disappointed.

Justice Trash. That is all there is to say about this one

Joss Whedon dropped the ball on this one. Stinker.

66% people like this trash really. You guys need to see better movies and give crappy reviews to the movies that deserve it. Disappointed. GARBAGE

Complete utter trash. Wait for it to go on Netflix if you must watch this movie or don’t watch this at all. Complete garbage and waste of your time. Hopefully there is no sequel. Can’t wait for black panther. It will do so much better than this TRASH

There is not one person in the world asking to see a sequel. that should tell you something. Terrible movie, that exited the theatres like discovering a skunk habitat under the seats.

Great movie Dccomics I Loved It!

I don't know why so many people and critics are trashing this movie because I thought it was awesome and I've now seen it twice. It was a good continuation of Batman vs Superman. My only complaint is that I wish the movie had been longer but I can only hope that more scenes are included in the DVD release. I just thought the movie deserved to be longer. I have now given up on Marvel after seeing their last few entries and I am now a diehard DC fan. I saw Thor 3 recently and thought there was way too much humor involved in it. It was the weakest of the three Thor movies and even the trailer scenes were not included or changed. Justice League was far superior in every way and each actor was great in their roles, especially Wonder Woman.

I grew up a DC fan. BIG time (Superman tattoo, birthday cakes, shirts, batman watch, etc)..but I was extremely disappointed in what they could have done with this team up but chose to do something different. The only thing that almost redeems it is when Superman shows how powerful he is and basically takes everyone on and tracks the Flash and the flash is like oh crap he sees me. Oh and digitally erasing Henry Cavill's mustache looked horrible.... Like how many scenes did they need to reshoot and do that to!? It's what turned me off in the first place. So many missteps. I am actually heartbroken for my childhood.

I was very disappointed!!! I was so jacked to see Riggs and murtaugh!!! No Joe Pesci either? Good grief !!! And can someone tell me where the predator was hiding throughout this production? Justice league, more like sucktice league!!!!

Another one of dc trash movies. Sick of seeing terrible movies like this. I expected terrible but it was way worse then my expectations. That is how bad this movie is

Best dc movie so far, but still trash. Dc is so terrible compared to marvel. Even when compared to non marvel movies its still bad. Dc needs to improve, or Disney can buy them too. 😂

Excellent rendition of the Justice League. I only wish they'd return Superman to his original character as portrayed in the Fleischer cartoons of the 1940's. That's exactly how Superman was designed.

The action and characters were great. We brought my 3 year old grand daughter with us to watch it and she loved it as well.

This movie is trash. Where was Tony Stark and spider man really those are marvel characters not dc thank god. Dc has no idea what it is doing with its characters but I don’t care what they do any more. I am done with dc. Hail Marvel. If you want to see a better movie then this go see Thor or Star Wars. Both are better than this trash of a movie if you call this a movie. The flash is annoying. The CGI for his running is terrible

A few bucks for a couple of hours of entertainment. I love the interplay between the members of the League. I look forward to the next installment.

Movie was good. We had a blast watching this movie. Bad reviews from people who are always angry. Lol

All I'm wondering is where the hell was Tony stark and Peter Parker? What a let down!!!!