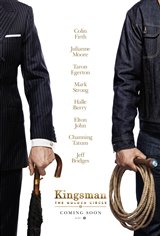 Even more stupid than the first one.

Holy cheese (mozzarella) Batman! Pretty hollow movie. Action scenes, although extremely far fetched were the only things worth of attention. And why so many F-bombs?? Pfffff

Truly crazy. Great film, filled with lots of action. Doesn’t focus enough on story but still worth a watch!

Rated it 3 stars only because 2.5 stars option not available. The car chase at the beginning was totally far fetched and unrealistic. So were most of the fight scenes . An overweight, 70 year old Elton John doing moves that would make Jackie Chan proud was ridiculous at best. Far too much and unnecessary use of the F- bomb. I thought that a Kingsman was supposed to be a gentleman. Should have been titled Crudeman . The meat grinder scenes were gruesome. While there was plenty of action and some good laughs as well as an interesting plot, overall a farce compared to the first one. Even Johnny English was better .

I loved the first movie and hoped this one would be as charming and clever but it didn't follow through. While this one looked great I felt it actually had too much action. Wasn't a fan of the plot and Halle Berry might be the worst actor of all time. I hope they make a third and redeem themselves :)

Too unbelievable. Too violent and too hard to follow. Very disappointing

This movie was fantastically amazing. Was worth seeing twice. I would watch again and I will when it comes out on iTunes. Was just as good as the first if not just a bit better. You should see this over justice losers

This is an absolutely terrible movie.

This was a sad and far too long movie that strayed waaay to far from the previous one. Don't bother.

Amazing under utilized cast. Was beyond ridiculous. Endless, endless waiting for the end. A waste of Colin Firth. Did they mean Whiskey to look like Burt Reynolds???? So disappointed.

Chock full of adult humor, gratuitous violence, and over the top james bond like plot. Loved it, just like the first movie! Not for everyone! Don't know why Channing Tatum got demoted to supporting actor.

Hadn’t seen the first one but I thought this one was great! There were enough references to the first one so you didn’t feel lost. It was a bit dark but funny at the same time. Just...a great movie! Eggsy was fantastic! Julianne Moore...so twisted. A great role for her!!

This is a rude, crude, and thoroughly ridiculous movie with no real plot. We walked out. Went to see it as the first one was entertaining. The opening chase sequence was the best part. Thought the star power of Halle Berry, Julianne Moore, etc would be worth watching but I am not sure why they agreed to this plotless and long movie. No stars from me.

OK movie, felt a bit contrived. Loved the first one, this was a pale followup.

My main concern was the extreme volume during the action scenes.I don't know if decibal levels are checked but this soundtrack was jacked so high I had to plug my ears.I did talk to a few employees once during the movie I stepped out to see if the volume could be adjusted and after the movie talked to another employee about the high volume.This is a hearing hazard and should be monitored.

Did not see the first movie but I did enjoy this. Elton John was funny. Didn't mind the swear words. Movie was very entertaining.

I had a blast watching this movie...it's meant to entertain you and there's never a dull moment...

A good movie almost a 007 type I really enjoyed it. Not really a sequel except for a couple of actors.

As a sequel it is awful compared the original. Why? Two reasons: 1) it was ruined by Americanizing the plot. In true American fashion the kingsmen organization is virtually wiped out...in rides the cowboys to save the day. 2) gratitutus gore. No need for it.

It is almost like a James Bond movie! I hope they make another one soon!

Having not seen the first movie, we went in totally blind..I actually loved this movie! I have to admit that it was somewhat scattered...Making it difficult to follow in places...I wish we had seen the first installment, as we were kind of in the dark with the story line, especially at the beginning..But I loved the characters, All of them are so talented, and funny at times! Shout out to Sir Elton John! LOL! and the very frequent use of the "F" word, which was hysterical! rather than seedy or tacky...I definitely want to watch the first Kingsman movie!

I loved the first movie. I fell asleep in this one. Too much stupid stuff. Not fun, not witty

This movie was so awful my wife and I got up and left after 15 minutes and got our money back. Don't waste your time on this disgusting movie. I could not say anything good about this movie.

Someone should tell the writers of this movie that land mines don't work that way. In the end, all the lazy writing and pro drug war propaganda is just a big F.U. to moviegoers. Please avoid. Thank you for your time.

Much more silly than the first installment, seriously, the Elton John bit was kinda ridiculous but whatever...movie was okay.

I think was political funny. There are others movies with worst swearing vocabulary and people are complaining. I love this movie.

Liked the first one; not this one! “F” word used way too much, almost to the point of just saying it to see how many times they can say it in one movie. Sexual scene totally unnecessary! Meat grind people & make other people eat the burger, seriously? I was really looking forward to this movie, what a disappointment!

First movie was good. This one was a waste of money and time. Humour was not laughable. Elton John added much to the movie.

I thought it was pretty good for a sequel. Did get a bit corny at the end, but it's a comic book movie, what do people expect. If you liked the first kingsman, then you will probably like this one. It was better than i thought it was going to be, and it didn't drag at all for a 140 min movie.