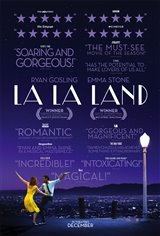 Best movie I've seen in a long time. Captivating story with decent singing and dancing and great music throughout. It's inspiring to see a modern movie that's just plain fun. No over the top effects, violence or needless foul language and sex scenes. I'll be watching it again soon.

It's a decent movie, not one I would spend a ton of money on. Most of the songs were forgettable but i enjoyed the dancing and it seems all the actors and actresses had fun making it.

lamest "musical" ever. dancing was dreadful, songs were forgettable, acting was terrible, anything to do with jazz was borrrring. most overrated movie I have ever seen in my entire life, and I love musicals.

I lost a layer of enamel grinding my teeth in frustration: the actors couldn't act, they definitely couldn't dance, and the story "line" was so ginned up it was drunk on its own delusion of grandeur. The only good thing about this film is when they LOST the Oscar at the Academy Awards.

It was wonderful to see the young generation of actors dancing, playing piano and singing! Romantic yet it doesn't always work out the way we plan! Should have won Best Picture!

Excellent music & acting. Should have won the Best Picture oscar!

So over rated. It was painful getting though this movie. I don't get what all the fuss was about.

Beautiful film, beautiful music, beautiful actors. The storyline was captivating and I will watch it many more times in the future.

Great music. A captivating new song I keep humming and the dancing was supurb.

Beautiful dancing, anyone who criticizes does not know how to dance. Loved the movie

One of the worst movies I've seen this past year. Way over sold by Hollywood. This movie just doesn't stand up to the greats like Ginger Rogers and Fred Astaire. The two actors in this movie can't sing and don't dance much better. Don't waste your time and money on this disaster.

disappointed in music and story line.

Boring can't get how it was up for so many awards.

Personally, I don't understand why this movie was up for so many awards. I was quite disappointed!

Loved this movie! Like old Hollywood. Performances by Ryan and Emma were incredible. Great storyline too!

Sorry to say but I was very disappointed. Not at all what I had expected! The movie was slow and frankly speaking boring! I like Ryan Gosling and do not mind Emma Stone. She seemed to juvenile to play this part. She was like a woman in a child's body. Just odd! I just think this movie was very over-rated.

thanks to the jazz music , I would rate it as a 3 , we both thought the movie was Boring !!!

Most Best Picture winners are boring, stuffy affairs, but not La La Land. 5 out of 5 stars.

For once the Academy got it right - La La Land is a deserving Best Picture winner.

Please don't make any more like this....................it sucked until John Legend appeared, then some good music, the it sucked all over again. Fred and Ginger are rolling over in their graves - LAUGHING ! Not a dominant voice in the whole show, and very few that tried couldn't carry a tune in a bucket. Richard Gere can't sing but he was SOOOOOOO much better than this loser.

The actress has bug eyes. Couldnt get over that! Yuck. Horrible singing, if you call that drival singing. Don't waste your money.

Blah blah land. Neither can sing or dance. More of Hollywood patting each other on the back. Blaaah

Feel good again by treating yourself to another screening of this year's Best Picture! 5/5

The first musical since Slumdog Millionaire to take home an Oscar for Best Picture!

Perfect in every way! No one should be surprised this won Best Picture.

This year's Best Picture winner is an absolute delight! You'll be grinning from ear to ear and singing at the top of your lungs!!!

This movie is a blur. It has about 5 plus theme to it. I found it to be very amateur, fragmented. Yes, I felt I was in la la land all right. I closed my eyes and slept in the long boring monologue and silences. I would not recommend it to anyone or ever want to see it again. It was a waste of time and money. I thought it was poorly cast except for the actual musicians. In fact that was the only memorable element of this movie was the actual jazz musicians. The performance in the Oscars for this movie was better than the set design for the movie and the dancing for that matter. Movies like this make me never want to see another movie in the theater. The trailer was very deceptive. I could have been enjoying the nice weather and fishing instead. I can't believe this movie won any Oscars at all. It is a travesty towards the art of film making. It appeared to me he took themes from several movies. Jazz movies. Dr. Seuss, Wizard of Oz, Dancing in the rain, Chicago, All that jazz, fame, and a collage of animations. The acting was marginal and unconvincing. One could have made 5 different movies out of this movie at least. I said "oh brother" out loud in the theater when they floated up to the sky in the planetarium they apparently had a key to. Also, I always wonder the director who includes a lot of empty streets with a girl walking alone in 5 inch high heels for blocks on end in the middle of the night. What was the point of this? Lots of questions, lots of loose ends, lots of la la, blah blah If you want to see a well done movie see HIDDEN FIGURES. It is interesting, good pace, consistent, logical, good acting, a well done and thought out film, that will stay with you forever and inspire you to overcome any bigotry one may have knowing talent is not dependent on the color of ones skin.

La La Land was wonderful. Only those who appreciate the musical of the olden days can appreciate the fresh updated musical. The songs were beautiful. The only thing I didn't like was the way it ended. But it was beautiful. 👍

Bored I had to leave early

Best movie, musical, directors, actors. Loved everything about this movie!! Extremely talented in every aspect! A wonderful love story that is so very real!

This movie genre is a flashback to the 1960's when I grew up watching musicals such as the Sound of Music. I think the low reviews are from younger viewers who were raised on gratuitous violence, sexually explicit, one dimensional movies. If you are unsure, take a chance on this movie and expand your horizons (a phrase not seen much these days). The cast is very good, the direction even better. Enjoy.

I guess those who rated this movie below a 4 star just could not get over the fact that there was no violence, gratuitous sex or extreme language. I found this movie to be a refreshing change from the shooting, vulgarity and sex scenes. The development of the characters was entertaining and enjoyable.

Love the movie. The ending moved me to tears. Great acting from a superb cast. Go see it if you haven't done yet.

This is such a beautiful film about following your dreams and pursuing your passions. My all time favorite film, La La Land is like stumbling on a view on a lovely night, capturing a sunset in a frame, or waltzing in a city of stars. Emma Stone is as radiant as the sun, portraying her emotions with perfection and vulnerability. The whole cast is superb, but Emma is brilliant! The filming and style of the movie is wonderfully nostalgic, and the music is phenomenal. I have had the soundtrack on repeat since I watched this movie! I recommend it to anyone who like romance, musicals, comedy, Emma, Ryan, or simply having a good cry. La La Land, I believe, wholeheartedly deserves all of its Oscar nominations and previous wins at the Golden Globes, BAFTAS, and SAG Awards. This is a perfect and glorious film, for the fools who dream.