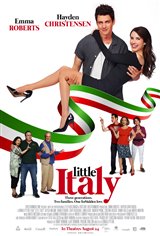 The plot was a cheesy (more than the pizza) and predictable.

Gave it a one and that is one to many .

Full of Entertainment as young people need it.

It'sa notta funny. A friggin embarrassment. How did this get a theatrical release? And to top it all off its a knockoff of a movie from back in 2003 called A Tale of Two Pizzas. https://www.imdb.com/title/tt0337728/reference?mode=& Read the summary of the plot. It sounds awfully familiar.

Funny, a bit cheesy but sometimes you do need that extra cheese. great comedy.

Really people?! Paaalease....what were you thinking? So bad, so bad...head shaking....so bad. SO unbelievable too. No ma and pa Pizza Joint would pay anyone outside of their family especially Indo-Canadians or South Asians to work in their establishment. Not realistic at all!

Please go rent My Big Fat Greek Wedding. If the people who made this movie were trying to capitalize on the fact that that movie made money depicting a culture then they will be very sorry for all of their financial losses. This movie was so bad. I wanted to leave but I was with friends and didn't want to ruin their afternoon.

Help! That's what this movie needs. I'm embarrassed to be a child from an Italian family who grew up in Toronto. Uggghhhhh! Why could they not use actual Italian actors that can act???? So disappointing. Please save your money and do not see this film.

I wouldn't see this again if it was slapping me in the face. I wish it had slapped me in the face while I was watching though, cause I was falling asleep. Had to keep myself busy by surfing the net.

Terrible! Save your time and money. This movie was absolutely ridiculous. Sorry, but it should have been produced and directed by Italians who actually grew up in an Italian family from Toronto. Nothing true to this story at all - so stupid.

I don't have to go to see this movie to know exactly what it is; a cynical cash grab by a production company taking advantage of Canadian tax laws. Neither lead is of Italian heritage, and I saw enough of the trailer to know a terrible N.Y. accent when I hear one. It appears that they've pulled out every tired Italian cliché ever used in a film (especially the Romeo & Juliet one), just to fill some space during the late summer season. No wonder Cineplex is bringing back numerous popular movies such as Superbad to try and drum up some business. Pretty sad......

Boring movie. I expected better. All i got for being there was a half hearted smirk. It was predictable. The characters had no depth. I didnt care if it wasnt shakespear. I was looking for some lighthearted entertainment, and didnt really find even that. Waste of my time. The two seniors where the most entertaing...only reason it rated a

This was a great movie! It was a light-hearted comedy that made you laugh out loud at times. Emma Roberts and Hayden Christensen did have chemistry. The Seniors in the film were funny as well. Definitely a romantic comedy.

This movie stunk! I wanted it to be good because I love Andrea Martin and the fact that it was Canadian made; however, it was just bad all around. The acting was stilted and weak. Emma Roberts and Hayden Christensen have no chemistry and even Andrea Martin seemed like she didn't really want to be there. Christensen was using some kind of weird New York fake Italian accent that made no sense because the action was taking place in Toronto. The movie managed to touch on every available stereotype, including two extremely offensive gay characters that were complete caricatures. Sadly, Christensen is looking a bit long in the tooth and seemed far too old for Emma Roberts' character. Roberts, for her part, is a mediocre actress who did not inherit the acting genes of her aunt and brilliant father and her performance was wooden and uninspired. The only one who looked to be having fun was Danny Aiello and that was probably because he was happy to get the pay cheque. Give this one a pass and watch a rom-com on Netflix instead. At least they don't pretend to be more that they are.

Great film and Canadian too!