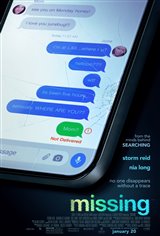 This flick is HEAVY into tech and soc. media throughout, it's a character in the Story! What I found HYSTERICAL that she is calling and texting halfway around the World, using SCADS of Different Apps and Hacks, often on the FLY, and Usually on the Phone, Yet Never ONCE seems to have a dropped CALL or TECH ISSUE of ANY KIND!! So Funny. Still, it was clever, different, fast-paced, and the girl (who also plays the younger sister in recent streaming hit 'Euphoria') was reaaly very good for such a relative youngster. BRAVO. Title could be Better.

all email sending no interaction

The format using the computer was different and took a little getting used to however I liked the movie. Didn't expect the twist of the movie. Could easily been a real life story of our current times.

If you want to watch a computer screen for an hour and a half, this movie will be for you! It was stupid and the ending sucked. Don't waste your money like I did.

Very entertaining. Can kids/teens really do that much that fast on electronic devices?? Dang! Fast paced mystery, but by the end, I wasn't sure what was real and what wasn't. I had to ask the woman next to me at the theater! I love that!!

Fast moving hard to keep up real mystery that keeps you guessing a thriller for sure. Many twist and turns. Do see it!

It is veey different as was mentioned by another rater however the mystery is hard to solve & has various unexpected twists. This movie can be enjoyed by people of all ages but specially young people who are so adept at phones, tablets & computers.

It will make you sqirm. Different than you might think & a mystery with a twist.

Quite different, I liked it!