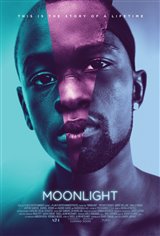 Because there are so many garbage movies currently playing I took a chance on this one. Hey, it won Best Picture. It has to be good, right? Wrong. Slow, boring, gratuitously far fetched (come on, who questions a 6 yr old on his sexuality? No one!) bad acting - this turkey has it all. REALLY BAD. The Academy gave this Best Picture if only because they felt they had no choice but to pick a movie, any movie. Mission accomplished. Unless you are hopelessly sympathetic to all things gay (I am not; I could care less) AVOID AT ALL COST! For those who gave this dog 5 stars ( or more than 1) - grow up. Its no one's fault you were born confused. But misrepresenting this as 5 star is wrong on so many levels. Shame on you.

Coming of age is even harder when you are gay, black and your mom is a crack addict, but Chiron finds unlikely help in Liberty City i the 90's, Miami's toughest section. Wonderful acting and sensitive in its look at homosexuality where it is least tolerated.

I liked the brilliance of the director's creation of intimacy. I loved the characters. I loved the casting and acting. The only thing I had trouble with was believing that the last actor in the grown-up phase of the protagonist's life was the same physical person as the younger actors in the boy's earlier life. You just have to forget the physical differences. I think one of the greatest scenes was the young man and his mother,her honesty in acknowledging her neglect of him. this was a compassionate and intimate movie with great character portrayals and emotional depth..

Terrible movie! Do not waste your time or money. Cannot believe it won best picture!

DISLIKED ALL OF IT! WORSE MOVIE OF THE YEAR!!!!!

The kind of movie that opens your eyes. Amazing cast. Music that reflects the atmosphere beautifully. Stunning to watch this one particular child grow up. I was thrilled it was recognized at the Oscars.

I didn't like this movie at all it really confused me. I wouldn't see this movie any more I didn't think it was good at all.

This is what film and characterization should aspire to be. Making ones way towards self realization under very difficult circumstances. And a really great score.

How could this movie ever have been chosen as Best Picture??? The Oscars have absolutely no credibility.

Probably the worst movie that has ever been selected as Best Picture in the history of The Oscars!!!

Saw it recently because of the Oscars and some of my favorite actors are in it. But sorry to say I didn't enjoy it. Had no sympathy for the characters. Thin story line and characterization. Confusing in many places. Never a fan of the shakey camera technique either. The dialogue was often hard to understand. Very disappointed and would not recommend it. See Hidden Figures ! It's the best movie of the year.

Expected to see a great movie since it was nominated best movie! Wasn't impressed. Did not see any redeeming value in the subject! Not my pick for best movie. I would have chosen The Shack, Fences, etc. anything but!

There must have been some redeeming value but it didn't come through. Depressing, but similar to Manchester by the Sea -- slow and depressing.

Review below keeps changing because it is not even worthy of one star. Boring, Bad acting, How did this win an Oscar????

I keep trying to rate this movie 5 stars but it keeps changing. Rated 5 stars!

I agree it was boring and slow. Still not sure why M. Ali won best supporting actor for this. His role was short and OK.

If you want to see something more exciting and entertaining go and watch paint dry. The Oscars have officially lost all credibility. Winning one obviously means nothing about the quality of a film.

The real Oscar night mistake for best picture of the year, was giving it to Moonlight. This was movie was slow, boring and missed the mark when trying to make a social statement of a given community. The continuity of the film just wasn't executed well. Scenes were so disjointed it almost seemed as if it was mis- edited. No great memorable scenes or acting here either. If this movie received such acclamation while Hidden Figures was passed up at the awards as it was, then there is a bigger problem in Hollywood than led to believe.

No plot. I couldnt watch the whole movie. Boring

I feel that this would have been more deserving of Best Picture, but that's just me.

Whenever I look at my watch several times during a movie and keep asking myself when the story is going to start is when I know I'm looking at a boring movie. The acting was great but a good movie is not just about the acting.

Everything I wished Boyhood would've been.

introspective.... bias is in every community. behave yourself and be nice. you most likely have similar views as the bigots and racists, of other communities. this story should move your mind toward understanding human nature. most individuals may not recognize their likeness to those they fear. get some help with your insecurity. *****

Boring. The only reason I gave it one star was because there was no provision for no star.

What was the point? No plot line. Long, boring.

I feel very bad for the person who gave it 1 star and said that it was boring and that he didn't get all of the 5 star ratings it was getting, down below.

Moonlight interweaves dialogue, silences, looks and gestures to reveal several experiences through characters. These characters nudge Little from Chiron to Black. The crucial philosophy in Moonlight is the caretaker, which is everyone's hand minus a fingertip--the gap that the protagonist must fill in to grow into himself. Once he listens to all of whom he is, Black becomes the dawn to that moonlight.

I found this ,ovine to be emotionally draining due to the outstanding performances. It really hits home during the current political climate & opiate epidemic.