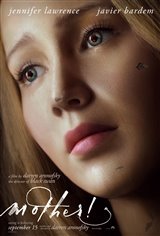 I found this film fascinating yet very depressing. I'll watch this again but not anytime soon. Yes, the allegory becomes very clear early on and it follows a narrative path that is largely unsurprising because we know the story of ourselves and our beliefs; but perhaps the point was to be obvious because the warnings cannot be screamed loudly enough. Disturbing because it needed to be. I didn't find it blasphemous at all and I thought the religious interpretation - especially the denouement - quite interesting. Weird that all the spoiler reviews stay up on this page despite the policy posted here. And people! Let's stick to reviewing the films and not each other, please. We should be civil. We should be better.

Yes I got all the allegories. Yes I got all the hidden meanings. How could I not when you are hit over the head with them! This isn't about superior intellect being needed to understand - it is about self-aggrandizement by anyone who liked this garbage. Yeah pretty high IQ here and I STILL think it was a waste of time and money. Just about the stupidest movie I've ever seen. No problem with the acting really (well some over-acting sure) but it is pretentious and overkill. The 'ideas' behind this piece of trash could be summed up in a couple of paragraphs without wasting all that time on making pseudo-intellectuals feel important because they saw some secret message. The message was - look how self-indulgent I can be and make everyone think i'm a pioneer. No Aronofsky - you're just predictably self-indulgent, and incredibly boring. It didn't make me think much except how dumb this movie was. And how gullible those who praise it are to think this person is some kind of great artist for being so absurd.

The people who are giving this good reviews are the same as the unleashed mob mentality as in the movie who become uncontrollable. Deindividuation. Don't waste your hard earned money on this trash.

- 1000 *infinity WoW MoM So, because it's computer generated imaging it's all GOoD? Umm..no. If you stand for nothing you'll fall for anything. Including this disgusting film. The whole world is so desensitized as it is. Oh..hey.. let's all be cool with the suffering of a baby. After all, if we're exposed to this type of violence, ( AGAIN and AGAIN) it'll be okay. Don't worry about it. Nope. Nope . NO! IT ENDS NOW. I think films should have warnings of infant suffering and violence. I'll be damned if these creeps ever get my money again .

Opinion is not part of how to rate a film - opinions are neither right nor wrong.

Holly allegory Batman! I have to think that anyone who is against this movie either does not fully understand it, or hates the idea that they are in fact (represented to be) part of the crazy mob that formed throughout the film. It's a great 'story' and re-imaging of how the world evolved. The infant was CGI folks! Get over it LOL

It was good to start with but as it went on it got worse and worse to absolute kaos and stupidity. So pathetic. ??

Terrible and offensive story. An attack on skme people faith and beliefs. If this attacked other subject matter here would be uproar but because it attacks our faith in god we seem to have to accept this in silence.

Fans of infant violence have slim pickings to satisfy their wants, but this film delivers!! Best movie since A SERBIAN FILM.

This idiot film gave me ptsd. Hostile insanity and the disturbing ending. Little baby peeing from fear. I have ptsd now from this . Can't get that image out of my head!!!! Yes, there is lots of simulated violence on the big screen, but, seriously! A baby! I feel sick now. Hate this garbage movie. Warning. Baby violence.

For audacity and originality there are few films like it. As for the viewer who said... " It's an allegory of the bible. It's still gross." Have you ever considered that the original story/myth that this is inspired by is the real shocking, gross story?? But then, people don't like having their beliefs exposed for what they are.

this could be voted for the worst movie of the century , do not waste your time or money

-5 Want my money back. Disturbing child abuse is art?! Anyone who thinks this movie was a masterpiece is nothing but a follower. (trying to lo.Ok intelligent) Umm.. Duh. . Don't waste your money to watch little baby Jesus be tortured. I'm serious. I want my money back. I will not enable this junk to come across as heART. I'll go see Star Wars. Thanks.

I have a brain. It's an allegory of the bible. It's still gross. Art .

I just don't know what to say. Not the worst movie I have ever seen because of the artistic value but WTF

Amazingly, it held my interest for awhile. Perhaps I was waiting for something to happen that would make sense and tie it all together to form a great revelation. It was weird from the onset, but not completely insane until a bit later. It was at that point I realized the entire movie was not redeemable. I'm still perplexed as to how they got Hollywood names to star in this. I believe the 5 star reviews who found brilliance in this dark surreal film must be thinking too hard. Movies are suppose to be enjoyable, not something you cringe through, then work it through your thought process to rationalize what you saw.

What the hell did I just watch?! Nice breasts though

Fantastic film, but obviously not for philistines.

Went out for an evening and decided what all the controversy was about this movie. Didn't find it. I did find a rambling mess of movie making though. I don't recall paying money for such a poor movie before in my life.

When a movie requires you to undergo 8 years of post secondary programmed school to understand the twisted content within it, you know you've missed your target market. I have four degrees and none of them can make sense of this nonsense. Perhaps if I used a kaleidoscope will doing meth it would make more sense? Garbage in garbage out. No one likes this movie, At least no one who appears remotely normal.

Extraordinary film making. It seems to be about the disintegration of a marriage but it is really about the horrific consequences of devaluing nature and motherhood to appease false sadistic and savage gods. There is an irony in committing barbaric acts in order to adore and curry favour with a creator who demand human sacrifice and the destruction of his own creation, his wife and progeny. The action takes place outside of historical time so the action is meant to be cyclical and recurring as in a cult. The message of the film is not conveyed through propaganda or preaching but through the unraveling of domesticity and the at first mystifying behavior of the environment and characters. Consequently the denouement, (conclusion) of the moving is a startling revelation for the audience. Aronofsky has learnt from auteur directors like Polanski and Bunuel, but this is definitely NOT a comedy or outright satire but a commentary on the psychopathology of belief and moral vacuity. How then can it be entertaining you may ask. It entertains by keeping the audience mystified and on the edge of their seats until the resolution. Highly original film making made with technical expertise and insight.

It’s very disturbing, it’s very dark, and it’s hard to understand without a background in theology or a decent understanding of the bible, environmental issues and politics. Well acted, especially by Jennifer Lawrence.

2 stars for trying ! Great start with Ed Harris & Michelle Pfierffer. Totally under used talent in this film.Veered off into a bad dream. Couldn't wait to wake up ( or for it to be over , lol ) Got all of the allegories of religion & spiritual chaos and the trappings of fame. Was it enlightening in any way ? Would I recommend to see it ? Not unless you have time & money to burn. LOL Love Darren Aronofsky's other films though !!! Can't all be great ! Right ?

Interesting to see how those who "enjoyed" this movie make deprecating remarks about those of us who do understand what art is - this was an unadulterated piece of s$$t and anyone with half a brain will recognize it for what it is. The actors cannot actually believe this is a good piece of work. Don't bother.

Absolutely one of the worst movies I have ever seen. An allegory? I think it is a joke on the viewers... pure nonsense.

This is the perfect movie for people who like to pretend that they are clever; they rate it a 5 and then claim no one else is intelligent enough to understand the deep meaning of the movie. Honestly, no one should have to 'dig' that deep...it's crap!

I will rate this a little low; due to movie was 2 hrs long, and many slow parts to it. No real strong plot actually to follow, nor was it a real thriller. More of a psychological mystery regarding what's it like to live with insane narcissist.. Yes, I did get the Cain and Able part. But in my option overall "I just the theater feeling what a long sick movie; that I could not relate with at all"

The world, en-masse, has been dumbed down to the level of poop-for-brains. Not only do I have an ever-increasingly difficult time dealing with people in my regular job from day to day, but as we now see, you have to spell the simplest things out for people. The movie is for intellects only and as you can see by the comments...the masses, are not the intellects.

I hope there isn't a sequel. Jennifer Lawrence just gets more and more annoying and she's in EVERY movie these days...

This was a piece of art - the whole story and the way it was told. If you didn't like it, you didn't get it. Mother earth, God, Adam and Eve, Cain and Abel and how we are ravaging the earth.

I love Aronofsky movies - when you figure out the meaning of the whole movie, it amazed me how he presented this film. Loved it!

A waste of my time.

worse worse movie ever. I even left the theater...too crazy for me...don't waste your time nor money...I can't even rate that movie