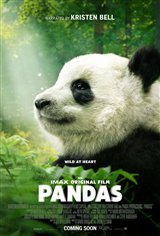 Pandas are so cute... I'm glad people are helping them survive. ...I don't know why people on here are so negative about this movie. I want to know where their facts about the dead pandas came from.

Great documentary about how scientists are trying to sustain the panda population and some of the struggles and victories in that quest. Looks extremely amazing on the IMAX mn zoo theater screen in 3D

I thought this movie was a great documentary. It gives a lot of information on Panda bears and even black bears. This is a must see documentary!

Clearly these young animals can't fend for themselves. This should not be glorified.

I feel really bad for those pandas now. I left the theatre feeling really sad about what is being done to them.

They've been releasing these innocent young pandas into the wild since 2006 and every single time, they're found dead. Either killed by another panda (they probably think every panda they see is a friend, because that's all they know of other pandas) or another predator(s). This is a sick, stupid experiment and I would like to challenge the scientists who are doing this to release their own children on a city street without any knowledge of the danger therein and see what happens. I don't think they'd be so willing to experiment with their own children's lives. Sickos.

Very disappointing. Misguided people are basically killing pandas. They take a panda whose mother was raised in captivity and release it into the wild, where in this case, it is almost mauled to death by another animal or in another case we're told about, another young panda who was released was killed. I have an idea. STOP RELEASING young pandas to be killed!!! They may know how to forage, but they don't know anything about predators, without a mother raised in the wild, and without being released with such mother into the wild, being released completely alone, you are ensuring that ALL these young pandas will be killed. They will not procreate, they will be killed. STOP ABUSING PANDAS NOW!