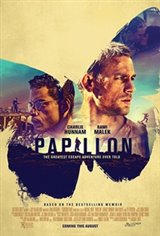 For someone who has never seen the 1973 film with Steve McQueen and Dustin Hoffman then this would likely be an average film. But if you really loved the 1973 original and the mesmerizing performances by McQueen and Hoffman like I did, then this one will likely leave you let down. I just didn't believe the bond between the two main characters, Papillon and Dega. I thought Charlie Hunnam did a fine job as Papillon but Rami Malek's performance as Dega was a real disappointment. Dega has to have a hook. A strong element to his character to create some separation and identity between the two main characters and Malek just does not find it. I think remakes of 1970's films, especially dramas, are a challenge for today's directors as they seem to miss the boat on what made them great. It was the relationships between the characters. The acting in the 1973 version is so far superior to this one, not just the two main characters, but all the parts. I think I'll try to find a copy of the original and be truly entertained once again.

Reminded me of another movie of the same name, but it was fine.

This is a fantastic movie not to be missed. Mesmerizing from start to finish. Loved it.

Very good movie - better than Dunkirk. There will be a few awards linked to this one.

not that of a great movie. very slow and flat. story not well told. the scenery was good.

I'm not one for remakes, or writing reviews, and yes the original is amazing, but this was very close. Everything, including the great photography was amazing. Best I've seen in a long time.

pretty good update of the steve mcqueen version. but i have to give a slight nod to the original .

Loved every second of it -- PAPILLON makes for a sexy night out at the movies.

not going to see it . really liked the original . Hoffman and McQueen are big shoes to fill!