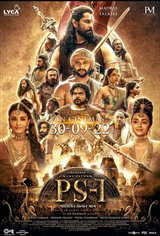 No story … worst screenplay. Too many stars …. Confusing movie .

Fulfilled the expectation. Cant wait for the second part!!

Great movie, story, music and production. It’s a shame that Tamil version is not screened, because of some greedy people vandalizing. Shame

I finally got to see all of this. Terrific! I loved it!

Highly recommend this movie. Younger generation may find it hard to understand since there are lot of characters. Love the way it was brought into screen without spoiling the book.

Such a wonderful make and an epic movie.

I'm not sure why people are giving one or two stars for this movie. This is wonderful peice of work in tamil cinema. Great job to the team and many many Thanks to the film.ca cinemas 🙏

PS - 1 This is a great movie by every means! Those few who are still comparing it with a novel may go and bang their heads. I’ve read the novel several times and the screenplay is absolutely brilliant! If I am Kaliki’s fan, so am also of Maniratnam’s movie version thanks mainly due to Ravivarman’s excellent photography. What Kalki wrote, MR. conceived has been brought in silver screen by the amazing photography & smart editing. These two are the unsung heroes! Everyone did their parts very well. Hats off to The Genius…. MR & the entire team!🙏🏽👏🏽💐

It is a shame how the movie that is about and represents the Tamil culture is not available in Tamil due to someone else's fault. Most Tamil people were waiting for this movie for years, and now everyone is disappointed. I really hope that this movie gets released in Tamil soon. To whoever did the threats and vandalism: What is the point and what did you get from this?

The movie is wonderful, but it is a shame that it will not be released in Tamil in Little Rock. Last time I was disappointed to see a tamil movie released in Telugu and we had to watch the subtitles. It is a shame.

Guys, it’s not Cineplex or any other theatre chain that needs to be blamed, there are some local groups who are threatening to Vandalize the screens if they play the Tamil Version of PS1 distributed by KW Talkies. I don’t understand the exact reason behind why they’re doing this but it’s so damn unfair to all of us who have been waiting for the Release. Cineplex decided to not go against these f***** because they already did it (vandalizing) once with Dulquer’s Kurup. The only small chance we have to get the Tamil Release is if all of us try and talk to Landmark And Cineplex Representatives at Landmark City Centre and Cinema City Movies 12 according to KW talkies. Try and keep calling them again and again if you have the time and are that interested in this movie. Spread the News on Edmonton Movie club Page in FB as well. Let’s hope we will get it

This is Tamil production , Tamil base movie and Tamil chozha dynasty film in 10 the century in Southern India and SriLanka. Almost 500000 Tamil people living in Ontario . Why this movie not released in our ancient Tamil language? What happened to Cineplex doesn't know this ? Tamil people should speak with politicians regarding this ruling thing . This is totally rediculous.

Historical movie. Everyone must watch.

Shame! Dissapointed. I will not watch it in any other language and other Tamils should do the same!

Tamil film not release in Tamil .this is our proudest movie ever

This movie is about histroy of tamils and their kingdom. But not possible to watch in Tamil language. Why cineplex is displaying such a discriminatory attitude towars the tamil audiences in Calgary and Edmonton? In these both cities at least 5 thousands Tamil families are living. Very much disappointed. I will never ever watch any movies in cineplex if this movie will not screen in cineplex. And we all Tamils living in Greater Toronto Area (300,000 thousands )will boycott you.

Great disappointment for thousands & thousands of tamil population in Calgary & Edmonton that this movie won't be screened in its original Tamil language version.

This historical movie is based on a massive empire who ruled mostly South India for the longest period of time for many centuries. The kingdom at one point ruled most of the Southeast Asia. The novelist Kalai Krishnamurti has done an extensive research to capture the events to publish it in early 50s. Hats off to ManiRatnam to make this into a movie to let the world know about this forgotten empire of India. Can’t wait to see the movie!!!😃

Long time waiting for the amazing movie. So excited to watch .

Great movie. However theatres must screen the Tamil version.

This is one of the most waited films!! I hope they play the Tamil version soon as it’s is the original and thousands of Tamil people are eagerly waiting to watch it in Edmonton!!

This movie is based on a very popular tamil novel close to our heart . We are so disappointed to see it will be screened in hindi. 99 % of tamils from Alberta do not understand hindi. So why do you waste a theater? You could have gave this movie to landmark. You are discriminating 30000 tamil people.