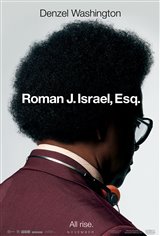 I do not think Mr. Denzel Washington's performance is underrated because he is black. Denzel is an excellent actor. I am sure he is well respected and he draws patrons of all races in to the theater, because he appeals to all people. I try to see all of his movies on the big screen. Denzel's acting ability is versatile in my opinion. Mr. Washington is a role model, being a successful black man, a loving husband, and a successful actor, director and producer. And he is a genuinely nice human being, basing this on all I have read, and observed on TV and in person once. I wrote the review on November 25, 2017, beginning with: I waited a few days before writing this review. For me, it could have been that the writing for that character role and or the performance based on the writing for that role did not add up or strayed off course. Coupled with I know a thing or two about the topics the character depicted, which did not add up. The end of the movie was sad but also powerful. And I like the review posted on February 7, 2018, because the rater's perspective on what the movie was about is insightful. I am giving 5 stars today because it is Black History Month and Mr. Denzel Washington is an excellent Black History Month Role Model, and an excellent actor.

This is not just a Black History Month story, or a story about Civil Rights, or the people portrayed (based I assume on a composite, or actual historical persons). It's a morality tale about Selling Out vs. doing the right thing, most pertinent to our times right now. There are many subtleties in the script and acting that were, I guess, not perceived by most of the reviewers. I wanted to watch it again, buy the DVD to watch it many times, right after leaving the theater. Denzel Washington's performance is also, maybe because he's black, underrated.

Its just a little over a month since the movie came out. l was gonna take my mom to see it today but it isn’t playing anywhere in the state of Michigan. WTF!!! l don’t go by others bad reviews of any movie. People loved Justice League, Thor Ragnarock and the new Star Wars movies, l thought they all were subpar. Why did this movie vanish?

It was boring right from the get go, I left 3/4 through the movie, hoping it would get better but it didn't . Two stars is being generous .

Washington and Farrell are great, that's it!

This was a terrible movie, no plot ,no storyline. And Denzel Washington acted badly, I really don't see all those 5 stars. When you go to see a movie starring Denzel you expect to see a good movie. That was not the case here.

Denzel excellent and divers actor .We enjoyed the movie from start to end. Recommended highly

While the plot was not the best, the characters were great!

Movie was great. They had Denzel looking cray but I enjoyed it. Great cast and terrific acting.

I waited a few days before writing this review. Critique: The movie does not state that Israel (Denzel) is a savant. Reference is made to Israel being a savant. The notion that since "attorney" Israel displays exceptional memory makes him necessarily savant is a fallacy. One of many important measures for anyone pursuing a law degree is willingness to read, the ability to memorize large amounts of information, and to possess excellent analytical skills and abilities. I have known people with high mental acuity: They read the outlines, the case book end of chapter reviews and summaries only, and use their intuition and ability to rule in or out on MCQs tests. They passed law school and became lawyers. Are they savants? No. In the past, lawyers have scored high on IQ tests. Savants generally have scored low on IQ tests "while demonstrating exceptional skills in certain areas." We do not know if Israel scored low on IQ and high on the LSAT. If we did, then we can infer this would be the one area where Israel was exceptional. How would we know since the movie did not add this material to the movie content. The movie plot was not fully developed. And I do not get why Israel did what he did. I did not like the idiosyncrasy the Israel character demonstrated. I thought Denzel was in role in most scenes and off in some. Be a savant But don't be a savant, and awkward, and street smart at the time. My critique goes to the director / producer Not the Actors. Colin Farrell did an amazing job being the stereotypical big firm corporate lawyer with excellent marketing skills (it's all about billable hours) with Colin turning into a more compassionate and reflective attorney by the end of the story. Carmen Ejogo was super amazing as the professional woman (holding her own) who inadvertently starts to fall for the awkward Israel. Ejogo spoke her lines with the right emotion for each scene – convincing! The movie is entertaining and I have no regret paying

I have to agree on the lack of plot in this movie .Denzels characters portrayal was great but, the movie keeps building to what you think is going to be some great ending and then .......nothing . Could have been a great movie if it had a better ending IMO.

I loved Danzel's portrayal of his character but the plot wasn't to my liking more intrigue or action was needed.

Sorry to poo on the parade but this wasn't a very good movie.Washington played a good role but there wasn't enough plot or story line to make it interesting.

Has Denzel Washington made any poor movies? Here, he moves well away from type as an overweight. poorly dressed, socially awkward savant with 3 loves - the law, pursuit of social justice, and music. Great adult movie for those who like adult movies....guru bob

Denzel knows how to get in to a character who seeks to address racial injustice. Keep these coming!