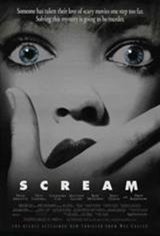 At our school we started a "bad movie club" to watch films that are so bad you can hardly believe they were made at all. We've been watching hysterical trash like Manos the Hands of Fate and Indecent Proposal. Movies like that had us howling with laughter. Someone suggested we watch Scream. Yes, it was really really bad, but not enjoyable even in an ironic way. It was so terrible we couldn't even laugh at it. All we could do was scratch our heads and wonder why such a horribly made movie like this enjoys such a good reputation?

Hahaha! People say this is classic?!? This was complete trash! Incredibly stupid and not scary at all! These frigging millennials must have been afraid of their own shadows in the 90s! This is probably the worst horror film I've ever seen. Writing was the worst. Acting was horrible, particularly by Barrymore who has been terrible her entire career. If you think this movie is scary then you're probably terrified by Sesame Street.

Some friends and I streamed this because we'd never seen this despite us being big horror fans. This film was terrible! The positive reputation this movie has is truly mystifying. This is a monumentally stupid film that thinks that it's smart. It does not actually understand the slasher sub-genre it is supposedly paying to, it actually mischaracterizes and slanders it. (the slasher sub-genre is frequently victimized by this sort of wrongthink). The film isn't scary at all. The characters were obnoxious. The script was infantile. This has to be one of the worst films ever.

It's horror for imbecilic sissies.

It's obvious all of you one stars are just probably one person changing accounts just because they want the score to be lower. I hate people like that. Just shut the hell up haters

Trash. If you like this movie, there's no hope for you.

If you know nothing of horror and have zero understanding of how the genre actually works you might actually like this garbage.

A cliche slasher ripoff of Halloween. Puerile and wasteful. A movie for idiot fan boys.

Crap. Parasitic trash. Ironic that Wes Craven saw his biggest career success with his worst work. Kevin Williamson has no talent but lots of good luck, and good luck is enough, apparently. Nothing at all scary here, and that's to be expected given the overly trodden ground covered here. This isn't a horror film but a very poor imitation of one. This is a total fake from start to finish. Avoid!!!

Garbage. Only ignoramuses who don't understand the horror genre at all like this trash.

This movie reawakened horror genre and was the first of it's kind, its been copied many times since The first time you see it you will be guessing the killers identity until the end!

Amazing I love this movie, I’ve seen it a hundred times

For you millennials: This movie set the bar for almost every horror movie that came after it for the next decade. Before this, horror movies were cliche slasher ripoffs of Halloween (1978). This movie changed that completely! Unfortunately Hollywood did what they always do and just repackaged Scream for the next 10 years in the form of every other horror movie. So if you didn't live through the Freddy and Jason era of the 80s then this movie won't mean as much to you. And if you didn't start watching horror until after 1996 this movie won't seem very original. It's been copied and plagiarized a thousand times since its release, so just understand that going in. But in it's day, it literally broke the mold. It gave us better acting, a script where you couldn't tell who was and wasn't going to die in the first 6 minutes, and an original ending. This movie blew us away.

Neither funny nor scary, this is a celebration of chiche that constantly undermines itself. Atrocious.