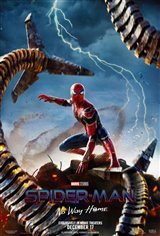 They cribbed the score from BREATHLESS for this thing?

The core messages of Spider-Man: No Way Home: everyone deserves a second chance and that people who have means should help others who do not; good deeds last forever because they inspire others; revenge creates more bad feelings and regret.

Spider-Man: No Way Home feels in some way like part of the best Spider-Man television show, built on characters we really care about, whose trials and tribulations are truly affecting.

Spider-Man: No Way Home is the ultimate coming-of-age movie for Peter Parker emerging from high school to become his man and superhero, no longer in the shadow of Iron Man and making his own way to become the web slinging hero that fans love.

Spider-Man: No Way Home reaffirms the unmatched cultural impact that exclusive theatrical films can have when they are made and marketed with vision and resolve.

Spider-Man: No Way Home is the meaningful sequel and conclusion to the three cinematic versions of Peter Parker that features Tobey Maguire, Andrew Garfield and Tom Holland. The Marvel Cinematic Universe finally balances the roster of familiar villains in the purposeful manner that makes Spider-Man: No Way Home to share similarities with Avengers: Endgame.

The Tom Holland version of Spider-Man has been well received and he has earned the number of awards for his performance in the Marvel Cinematic Universe.

No Way Home expands the scope and stakes of the Spider-Man franchise without losing sight of its humor and heart.

I really enjoyed this newest Spiderman.Thankful to still be able to go to the show, get out there and support the industry people!

I have never watched a movie so good! I wanna REWATCH even tho I saw it just 4 days ago AMAZING!!!!! I LOVE ITTT MY NEW FAVOURITE MOVIE FOR SURE!!

The best Spider-Man movie. It had so much action that I’m seeing it again.

The entire theater stood and cheered when Nicholas Hammond appeared. This is how you do it, folks.

It was an affront to all I hold dear.

I don't mind a little humor in action films. But the humor attempts in this spider man was horrible. Ruined the film for me.

I haven't seen it yet, but my parents recommended it. If they are recommending something, it has to be good.

Bored first half of movie. Lots of great action second half. Husband loved it but I wasn't impressed.

By far the best of the "Home" trilogy and right up there with the first two Sam Raimi Spider-man films. Had an absolute blast.

More hollywood crap and robbing us fools for paying.Total waste of money with their political liberal crap.

liked everything most bussin movie ever

Though that just other Spider-Man villians would appear and just a fight but alot more going on. Without spoilers, this movie had heart and a good message about try to solve issues without just having to fight. Ending was great, times where you are thinking it is going one way then it changes. Some cheezy parts at times but what movie doesnt. .

Like a lot of people, I was hugely let down by this. Don't make any more Spider-Man movies for at least a decade.

That was really fun. It's great to see all the legacy characters make an appearance.

Totally the best Spiderman of the series. Have gone to see it already twice and live the story and the action scenes were great

One of the best movies I have seen, everything was done perfectly, and I have nothing to critique about it. Definitely worth seeing!

So much action, great story line, great acting. The Best Spider Man EVER> GO SEE IT. It's the best movie out now

An okay movie, but Eternals blows it out of the water.

The best of the MCU/Sony movies post pandemic. Not perfect but better. The actors for MJ and Ned weren't up par but the other characters were very well done. The CGI was a bit convoluted at times. The story line needed one more explanation to fully understand the plot of the multiverse.

Whoa! Just Whoa! The banter was awesome between everyone. Good story, easily explained why Electro looked the way he did as opposed to the movie he was in. Wicked action. Awesome emotional moments. Fantastic fan service! And Amazing Spider-men ;) ! This is on par or better than Civil War! I wish I could say more!

The best spiderman movie, its amazing !!

You just gotta see it yourself

Looks like we have seen all the scenes in the past from this movie. I am sure it will still make lot of $ just on the brand name. This is a good model for movie makers that dont have to innovate anymore.

Is Spider-Man: No Way Home the most anticipated movie in cinema history and if so, why?

This movie is just a fun time.

Wasn't he unmasked in The Amazing Spider-Man when he saved that kid on the bridge?