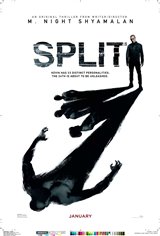 Honestly, I don´t get how people could get bored. I think the cultural warholism with all that generic Marvel crap with CGI mess influenced human brain to the point people lost ability to watch original movies with interesting point and great performances from the actors.

Aside from the good acting this movie is sub par the story is boring and feels incomplete .

There was not a moment of boredom in this movie. I enjoyed it from start to finish.

Very suspenseful, great plot, surprise ending made it worth it

great movie, lots of suspense, well worth the watch

I was so tired and about to fall asleep before the movie even started. I stayed up till the very end. M. Night is back! I like the very last twist which ties something else together! McAvoy needs an award nod big time. My one big issue is I wish we saw ALL the other personalities, not just a handful. Mind you, there were still a lot.

James McAvoy is AMAZING in this movie. His ability to switch between "characters", or more like personalities, is like non-other acting I've ever seen. You have to see this movie. It's officially my favorite movie. If you watch it a 2nd time, you will notice even more details. Watch it!

I believe that this is a real psychological thriller and filled with suspense!Acting was good. I think it will do well.

it was a good thriller and it kept your mind working

Dreadfully slow. Nobody in the theater seemed to like it. A damn shame.

No one else could have pulled this off like James McAvoy did.

This move was excellent. The ending was different. The story line was also, different from the rest. Those who gave the film one and two star ratings are being super critics. The actor did a phenomenal job.

It wasn't nearly as good as I was hoping. The ending was especially disappointing.

i am so sick of movies that use that old offensive trope that mental illness is dangerous and makes one a monster. this is a terrible film that relies on terrible stereotypes. also, the acting is so bad. poor james mcavoy. just, no. no. no. no.

Excellent film and the ending left me breathless!!! 2 Thumbs up!!! Totally did not see it coming!!!

Not what I expected which is a good thing!

Another terrific twisty plot from the brain of Shyamalan, wonderfully realized by Mr. Tumnus himself, James McAvoy, in tour de force performance. But, unlike The Visit, I saw the final plot twist coming.

Acting was great, but story of the movie so poor. This is some what a Christian's theological twist, if you are pure from sin then the killer won't kill you in the movie.

Should have heeded the bad reviews on this movie. Not even worth watching on TV. As one previous reviewer remarked, should change his name to Shysterman!

The best part of the movie was to take a nap while outside was raining and cold. Save your money.

When they are going to take down this piece of junk of movie?

His movies are like piece a quilts. They are from different movies. No beginning not end. He should stop making movies.

Terrible. We left earlier from the movie. We got our money back. Another scam movie from him.

Very well done, etc. I got a kick every time I heard him say 'etc'. It was like the King and I, etc etc etc. If the character wasn't such a devil he'd be very likeable. All the characters played well. The uncle was reprehensible, why does he live? A theme of life, that real scumbags live long lives, & everyone thinks they're wonderful.

I am a fan of Shyamalan's movies and enjoyed the movie. Great performance by lead actor James McAvoy portraying a man with multiple personalities. This psychological thriller has a great plot but it was a bit disappointing at the end with the element of fantasy.

I'm writing this preview based on M Night Shysterman's previous attempts at movie making. His worst effort, indeed THE worst attempt at putting together a "horror" movie was The Happening, where the terrifying subject was a virus causing people to kill themselves. This was depicted in the movie as blowing wind. WOW what special effects. That's why I wouldn't spend a nickel on any of his movies. Pity that Anya Taylor-Joy is in this abomination because she has shown herself to be a fantastic actress. (see The Witch) Hope she chooses her roles more carefully in future.

Shyamalan's movies are copying ideas from others movies. This movie looked like those typical movies made but college students when they are in a hurry to get a grade. Lol. Seriously? I am taking back. College students would be doing a much better version of this junk movie.

The entire movie was a total disaster. We waited for a good part from the beginning to the end and we got veru disappointed. His movie always end with weird boring endings.

Split was very suspenseful and kept me on the edge of my seat the whole time. I don't know why people are saying the ending was bad because it was fantastic. I can't wait to see the third movie. I didn't even know this was the second one.

Comical, not horror. The best part of the movie was my pulled pork nachos. Yes, that's how bad it is.

No idea what I just watched but looked boring. Did he try to reboot a movie? I want my money back.

Sixth Sense was a copy from one the TV series from the 70s. Avatar was a disaster. The lady in the pool was very stupid. I though he already gave up making movies, This movie was 100% predictable. We walked out before the movie ended.

Awesome movie. Sequel should be in the making.

Big fan of M.Night Shyamalan's movies. He is very talented and creative director. I loved The Village,Lady in the water, Devil which I highly recommend. Split movie was good but agree with those who didn't like ending. There was not M.Night's "twist" that many expected to see. It was confusing seeing Bruce Willis with a name tag from movie Unbreakable. Yes, amazing acting by James and I also liked female lead acting.

Really enjoyed this - interesting subject matter, and the backstory ties in nicely with the current events. It is a psychological thriller that is not fast-paced but neither are any other of M. Night Shyamalan's movies. Sit back and enjoy.