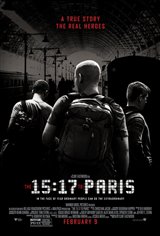 pretty good , worth the watch for sure

way too long! for the conclusion, and i think the actors got talent but the one directing ...arggg!

OMG! Probably one of the worst movies ever made. Im stunned that this was a Clint Eastwood movie! The worst acting and plot of all time. These good reviews are obviously coming from blue blooded American Christians that support Trump and Pence. Terrible movie dont waste your money.

I loved the depiction of heroic American manhood! I took my fourteen-year-old sons and my sixteen-year-old daughter, and we all thoroughly enjoyed ourselves—though my sons say I “blubbered” too much at the touching scenes.

I had no idea what this movie was about or that the actors played themselves in the movie. Not to take away from there heroism but the movie itself was one of the most boring movies I have ever seen except for the last 10 minutes. I leaned over to my husband during the movie and said the acting in this is awful not knowing they were they actual heros playing themselves until the movie was over. I was surprised this was a Clint Eastwood movie. Painfully bad acting and extremely slow moving! But definitely Heros and should get credit for saving lives!!!! This would have made a better 1/2 hour documentary in my opinion!

the appeal of this movie it truly is an 'every man's movie'. These guys were not super heroes, special ops, they were just doing the right thing at the right time. Note: they got especially lucky as you'll see in them movie. Fortune favored the brave yet, knowing they did not know how things would play out, truly made this movie a worthwhile watch.

Those three guys are heros! And the acting was really good And the scenery was terrific Thank you Mr Eastwood!!

A real story about real heroes. Not the Hollywood fantasy nonsense.

Very disappointing! I could accept the real heros being themselves but there is no excuse for the rest of the actors being so terrible at acting. Makes me wonder if Clint Eastwood chose terrible actors to help down play the fact that the heros are such bad actors.

It's nice to see a show that celebrates heroes rather than worship actors.

This movie is a great true story of long lasting friendship and commitment that culminates with astonishing results. A very good message to encourage young people in pursuing who they were called to be. Kudos to Clint Eastwood for highlighting these courageous young American heroes.

No story...bad acting by amateurs.

Great movie! So glad I had the chance to see it in theaters. The real life guys did a fantastic job and it was so cool too see what exactly happened on the train and how it went down. Also enjoyed the back story.

I especially like the use of the actual three guys to play the parts of the three Americans who foiled this train terrorist. They did a decent job of acting as well.

Great movie! It was refreshing to see a movie with real life heroes playing themselves. Personally, I prefer to see the real deal than to watch Hollywood actors who might overact!

One of the most boring movies I have ever seen. The inexperience of the actors is glaringly apparent. Shame on Eastwood for making a full length movie out of this story and advertising the use of these brave young men as a ploy to lure potential viewers.

It was an enjoyable movie to watch. I see ratings that it was boring, but for my husband and I, we were entertained knowing that this movie had real people who experienced this this attack on a train. The young men did a great job and the camera shots felt like it was happening in front of our eyes. Well done Mr. Eastwood.

Great movie I’m going to see it again it’s really cool having some real heroes act instead of some phony Hollywood actors act like hero’s. The people that gave uit a one star must be starving actors.

Whole movie is boring filler that leads up to a few minutes of action at the end. A failed attempt at making a full length film about an event that happened within a few minutes.

Nothing happens. 1 1/2 hour movie for 3 minutes of suspense with bad acting

wish there were MORE movies with a real message! Perhaps: 'God is NOT Dead' David AR White and Sorbo . and 'Couples' with Kirk Cameron

Kudos to Clint Eastwood for trying to use the real guys, but even he can't get a real life hero to be convincing on screen. Please, hire the professionals for the job. And the plot? So thin it's anorexic. You obviously can't take a two minute event and turn it into a 2 hour movie. At a time when America desperately needs heros, I get the effort put into this film. It just doesn't work.

Very boring movie! Was all about their growing up years. I left half way through. Do not waste your money. Do not understand all these positive reviews.

Excellent portrayal of the event and involvement of the three characters developing from young adults to career adulthood defined their reaction to the situation that occurred, snap reaction.

An excellent portrayal of ordinary people going about their routine lives until called on to do and to be something extraordinary. By taking the time to build the background of the American's and show the little decisions made over days and years Clint Eastwood helps us to appreciate the miracle that these men were on the 15:17 to Paris on that specific day.

It was a remarkable story. I liked that the 3 actors played themselves --they were authentic and did a better job of playing themselves (as Clint encouraged them to be), rather than using professional actors. And glad to see that the French acknowledged and honored them so highly. How fortunate these brave Americans were on that train.

Thought this movie would be better than what it was. Very slow moving and boring until the end. Eastwood usually comes up with good movies, but this one is dissapointing.

Better then I was expecting. It would be interesting to know if the three friends really were such putz's before they were put in harm's way. I went to military school, 55 years ago for the last three years of high school. While I considered myself socially awkward these guys were in a class by themselves. Even in the early 70's the French Police carried submachine guns when patrolling train stations. NOT something that you saw in the USA at that time. Note I haven't been in a Major Metropolitan area for at least 15 years so don't know if submachine guns are now the norm for police in the USA.

This would have made a better documentary

This story needed to be told since the media didn't make much of it. There are many American heroes that we don't hear about. It's not about the acting. It is about true heroism.

Outstanding move on Clint, my Man is on it again... all about the roots of our Country... so I’m sure 99% of Hollywood and related will call it a failure.. Clint, Courage, Prayer/ faith and American boys... standing up for the call! Richard America, Hispanic decent

Too Much "Filler" and irrelevant material.

Very good acting by the people who went thru the trauma of terriosiom. Emotional, tho a short event you are gripped by “shorts” placed earlier as “teasers” ,and enjoying young men growing up. Loved it tho “Drained” buy the “fighting” scenes.