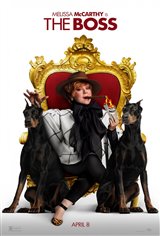 very disappointed, Melissa is better than this movie proved to be. Seems like she is settling for whatever she can get. I would not recommend this movie at all!!! 2 thumbs down

Maybe one of the worse movies I ever vieiwed

So funny! Not for children under 16 because there is a lot of swearing and sexual jokes. But to an adult the jokes were tasteful and Peter Dinklage was soo funny! I wish he was in the movie more. Must see! :D

Melissa wrote this movie - start acting like a role model & get rid of the potty-mouth; if you want to hear a bunch of swearing that adds little to nothing to a show, then waste your time & money & go see this terrible display of acting!

one of the worst movies ever! You will never get back the 90 some minutes of terrible acting!

Terrible movie - Melissa should stick to being a supporting actress; as a lead, she fails miserably!

One of the worst movies I have ever seen. Almost got up and walked out. Stupid plot, bad acting, and awkward rather than funny. Very disappointing. Don't waste your time or money. You can never get these two hours of your life back!

Yes, the language was somewhat bad at times but this movie was enjoyable.

Vulgar and rude. NOT worth watching.

I love Melissa McCarthy - but THIS!!??? It was rude, crude and just plain dumb... I should have walked out and asked for my money back. Total waste of time and NOT remotely entertaining.

Entirely too much profanity. And absolutely none of the profanity added anything to the plot or story line. Not funny at all.

This ridiculous excuse for entertainment has absolutely no redeeming qualities. It deserves a minus five rating.

This ridiculous excuse for entertainment has absolutely no redeeming qualities. It deserves a minus five rating.

Really Melissa McCarthy??? Theatre was almost full but word should travel fast that this is a movie to MISS! I am so disgusted that Hollywood would release something so trashy.

Not much more to say than this movie is pure garbage. Few kids were laughing but for the most part I think everyone realized that we were watching probably one of the worst movies we may ever see. Save your money - I would not even spend money on the DVD.

worst movie I ever saw... was raunchy and listening to dirty and swearing language through the whole movie became a little bit much....would not recommend...what a waste of my time and money! lousy story line

A little disappointing after "The Heat" and "Spy". I expected more and the plot was dull.

Her other movies have been funny. This was not funny. Too much swearing and vulgarity.

It's the most stupid movie I've ever seen. Bullying all the way. For such a talented actress, it is a waste of talent and money and time. Not worth it.

Pretty typical of a Melissa McCarthy movie. As an established star now she and her writer husband should be moving away from the adolescent tired shock language they seem to be so fond of. She proved it isn't necessary when she did St. Vincent. There were a few funny lines, but it could have been so much better and the message would have been worth sharing. At this point it's the same as Adam Sandler and his movies. No matter how stupid and pointless, the movie gets made. I'd say wait for rental or cable to see unless you are a die-hard fan.

HORRIBLE! Waste of my money

This movie lasts twenty minutes. It is grossly stupid and without sensibility.

keep your money and watch it at home... not that funny and it's rude.

some idiots sitting in front of me were texting all through the movie and they were the only ones laughing .... go figure! There are a couple of small laughs and that's about it. Same old stuff with McCarthy. Her acting skills are very limited. This becomes more evident with every film she makes..potty foul mouth is getting old and so is she by the looks of things.

I am disappointed and I should have known better. If you seen one Melissa McCarthy movie you know what I mean. She can be funny for a minute or two but she tries to hard by using vulgar language thinking it would be better and it is not. I just found her disgusting with her constant references to S****ing d**k all the time.

I was not sure if I should rate it a 3 or 4 stars. I gave it a 3 because there are too many references to sexual acts over and over again. This show would be a lot better without dragging that topic. Many of the people in the audience were young teens and some younger. The little girl in front of me kept asking her mom what these meant every time McCarthy would bring it up. I get that mentioning it once is funny but come on, it's no longer funny when you keep repeating it over and over. Boy does she look old in this movie.

Hilarious cannot wait to buy it on dvd

Great movie, will go see it again!! It was hilarious!!

I laughed throughout the movie!! It was the best movie I've seen in a long time!!

Garbage,this movie will knock Melissa of the pedestal, not funny and I have a potty mouth

The weather channel is funnier. What a waste of time and money