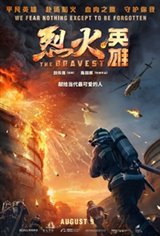 Ok, as an American firefighter, I don't even know where to start with all the technical errors. Also, there's no crying on the fireground, especially a group cry. Had this incident played out as shown, there would have been a much higher death rate. I gave 2 stars due to the special effects. It hurt a little to watch it all the way through. I thought backdraft was bad. At least, supposedly, 75% of the fires were real. I could go on, but it's too painful.

From the same producer that brought you Crouching Tiger, Hidden Dragon. Based on the real events in Tianjin 2015. In a race against time, firefighters risk their lives to control the catastrophic oil pipeline fire that can escalate into a destructive magnitude. While the movie has great pop & awe cinematography and lots of explosive action to keep you on the edge of your seat, there could have been more character development, better story tie-in with characters, instead of them just suddenly appearing out of nowhere. Some lines were corney and could've been omitted from the script altogether. It just didn't make sense to have it in the movie. For example, taking selfies at such a serious moment, didn't jive. Although the film was in Mandarin, it provided accurate English subtitles as well as Chinese subs. I read the English subs the entire movie, but never missed any of the those great explosions or other action packed scenes. Have some tissue at the end. Overall, it's recommended you go see this movie.

Glad it has English Subs. saw it and it was fantastic, action-packed. well done. will see it again. I recommend it.

Based on real life events. When an oil pipeline in Bingang’s harbour explodes, oil flowing through a gigantic Tank catches fire, igniting the tank and triggering unrelenting explosions, threatening the lives of millions in the city, the province, even neighbouring countries. Yet as the people flee, fire engines rush into the flames… only The Bravest can help.