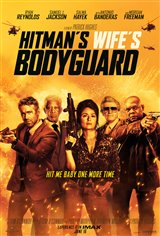 My husband and I walked in the theatre without a high expectation because of the mediocre rating. However, we, especially I, laughed so much, that I had to control myself as I kept laughing for another minute or two after some hilarious scenes. Way to go Ryan, Selma and Sam.

Feel good comical movie. The three main characters were terrific and funny. I appreciatd the swearing by Selma Hyak. It was very timely. Good flick and definitely worth seeing.

Selma Hayek makes this movie more fun and more interesting than I thought it would be.

I watched about 10 minutes of this POS; deleted it and went out to do something useful after wasting 10 min of my life I'll never get back, and mowed my lawn; much better.

Saw this at 11:30 this morning which was the first theatre showing after Ontario entered Covid Stage 3. What a lively and fun ride! Totally gratuitous violence but no one could say this is serious business. Ryan Reynolds attracted me to this movie because he is simply a funny man, but Salma Hayek proved her acting chops as the wife of hitman, Samuel L. Jackson. I chuckled all the way through this crazy story/action and forgot about being alone in the theatre and not touching the area in which I was sitting. Too long in shutdown/lockdown, I loved this hilarious, lighthearted romp through Europe. All of the actors did their bit well and writing, direction and photography were well done.

What a waste of my time and money. This movie is a cartoon with non stop graphic violence. It became so monotonous, I dozed off. It might win a contest as to how many times you can say the "F" work in one movie. I went to see it because I would expect a good experience from these talented actors but this is an embarrassment to their reputation.

It has 5 top notch stars in this show and I was disappointed! Constant swear words in it. I am okay with some but this was ridiculous.

Basically it it gets 2 stars for the beautiful international locations and for the fact that I laughed maybe twice. The plot made no sense, and if you follow EU politics at all, it's actually a bit depressing. The writing was so lazy that I have to assume that they blew all their budget on travel and actors so they had to hire a 9th grade drama class to write the script.

Perverted vile dialog !! , not needed or funny ! No need for it ! pure Garbage !

I was waiting for so long for Free Guy to come out, and stranger things 4, and this was the best! Worth the wait!

Tried too hard to be funny, threw f-bombs left and right

I quite enjoyed the first one - it’s story, humour and the chemistry between Ryan Reynolds and Samuel Jackson. This one mostly had Ryan playing third wheel to Samuel’s and Salma’s characters, and veered too often into slapstick. I also found Salma’s character fairly unbearable. It had its moments, but I won’t be watching this again for sure.

An unfunny cash-grab which has Samuel L. dropping his F-Bombs and Mother-F-bombs like candy. Would have been smarter for the likeable and usually funny Ryan Reynolds to push for a part 3 of his Deadpool franchise. Selma Hayek still looks foxy but what the hell happened to the once A-list Antonio Banderas? His wig was awful and his one-liners sound like they were written by a fifth-grader. A lot of CGI ( too much) in this movie and I kept looking at my watch to see if it was getting to the 2 hour mark…yep.

The first film was lame and didn't warrant a sequel; but it made a lot of money so we get another lame movie. Crapola!

The 1st was better but still worth watching. Salma was over the top

Hilarious, laugh out loud, even with all the "F" bombs which I usually don't like. Excitement, adventure, romance, betrayal, blowing things up, girl kicking some serious butt, killing bad guys, stopping some evil plot, and so funny. We all left the theater laughing!