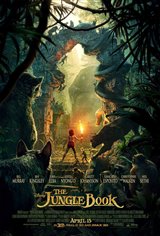 My son and I truly enjoyed it. It was exhilarating at times and sweet at others. Overall a great family film.

Movie was awesome! Watched with my 11 year old daughter and we jumped few times! Had great graphics, sound and animation! Fave character is Baloo :)) Will def buy the movie when it comes out

Absolutely loved the movie. Truly brought back my childhood memories! Definitely would recommend !!????

This film was a really lovely update of the older animated Disney feature. I loved the empowering ending (won't say too much more - no spoilers!). My five year old found it a bit scary at parts, and not as entertaining for her age group as the Disney animated films - but I think older kids will absolutely love it.

My 8 year old son and I loved the movie! Jon Favreau is an awesome director.

Pure Disney magic! The movie was simply amazing to watch! Thank you Tribute for the advance viewing tickets :)

The one cute little boy was raised in the jungle & went through such an adventure to make his point stand throughout: living with nature where he felt safe with love & protection of the jungle law... I walked out of the theatre feeling in awe of how brave Mowgli did with all his survival skills.. Beautifully done in 3D attracts me from the start to the end of movie.

This is an excellent film. I loved Baloo.

An enjoyable movie for all ages. Bill Murray's Baloo was the highlight.

A fun movie and interesting update. Voice acting was well done with the possible exception of Christopher Walkin, whose accent seemed just a little off. Though the musical numbers that were included were expected, they also took you out of the movies' flow and could have just been left out altogether. All in all, worth the money - 3.5 stars

Love, love, loved it! Will go see it again and tell everyone it's a must see!!!

The CGI and voice acting were first rate and Neel Sethi was quite believable as Mowgli. The ending might not be for the youngest viewers...

The jungle looks absolutely, awesomely, totally beautiful in 3d! This is by far the best rendition of the Jungle Book yet!

I was very excited for this movie to come out for my daughter because she loves the original Disney cartoon. She is 2 so it may be a bit scary for her at some parts. That's about the only negative thing I can say about it but it isn't much of a negative comment because it reaches to a larger audience than just small children. I personally enjoyed the movie a lot. The visuals were spectacular, the songs were well done (although my kids would probably want more) and the story is something I can be glad my daughters will grow up to know. I won't be too upset if this is one of those movies they watch constantly because it is one that I won't get sick of too quickly. I couldn't be so lucky.

This is a great re-make of a classic movie. Neel Sethi captured the hearts of the audiences. I will probably watch this movie again.

Fun, entertaining, great special effects...but to only human in the movie can be a little annoying....

My daughter and I enjoyed Jungle Book very much! We have told all our friends and co-workers that they have to go see it!! It was very realistic and at times we were on the edge of our seats!! Thanks for having us to enjoy the advanced screening??

Loved the original cartoon from the 60's but this was a completely different experience which I thoroughly enjoyed. This screen experience is totally unique making it difficult to differentiate what is real and what is imaginary. If you like CGI, you'll love this movie. They have pushed the limits to a whole new level in using this technology. Combined with the talents of many A-list actors, this movie is a must see for all movie-goers.

Was really impress by the CG animals, they didn't look fake. The winks to the original and classic Disney masterpiece were amazing. A great remake for new generations to discover.

My friend and I both quite enjoyed the film! We thought the kid actor did a wonderful job and the CG animals were incredibly well done, so photo-realistic.

A visually stunning masterpiece! Even though it was almost two hours long the movie flew by ... I was very entertained. In my opinion it is a movie for older kids as well (just a heads up).

Lots of childhood memories watching the series on tv, the movie was very well done. Loved it!!! I highly recommend

I am 40ish and I really enjoyed this movie - especially the 3D effects! Indeed, I found myself jumping out of my seat a few times and feeling chilly as it began to rain (on screen.) I would recommend that children 8 and older watch this movie (some parts may be too frightening for children younger than that.) It is a movie for EVERYONE! (with a wee MORAL to go along with it.)

The Jungle Book was a long time coming but definately worth the wait. Jon Favreau made magic with computer generated animation and the talents of one young boy Neel Sethi - Mowgli. The voices of Bill Murray as Baloo, Idris Elba as Shere Khan, Ben Kingsley as Bagheera and Christopher Walken as King Louie were very well cast as they were recognizable and each brought their personalities to their roles. Very up to date in language and expressions which added to its charm. I am sure this is a movie to watch over and over again but seeing it for the first time on a big screen is a must. I would however not recommend it for very young children as perhaps some of the jungle experiences might be frightening or not understood. All in all a movie not to be missed.

True to the original, entertaining and fun. A movie for all ages!

A Disney masterpiece. It has everything: an original storyline, engaging characters, great soundtrack, lots of humor too. This is one of those films that left a big impression on an entire generation of children.

Great job by Neel Sethi, I totally believed all the animals were really there. Bill Murray was hilarious. Overall, absolutely loved it!

Excellent adaptation of the novel. Beautiful story, touching and appealing characters. Funny. One of Disney's most loved and best known films. A Walt Disney masterpiece.

The film was magnificent! The 3D imaging, the details of the animals, the jungle, wow!! Bravo for this film :)

We absolutely loved this film, it's really beautiful and a must see, but I wouldn't recommend it for young children.

What a fantastic film. The animation of the animals is so believable. The film was a bit violent for little ones. My five-year-old daughter liked it, but she had a nightmare afterwards. Probably not for children less than 6 or 7 years old.

Great family, Fantastic graphics, the little boy is great, wonderfully told story that grips you throughout the movie - is sure to become a classic! Best Jungle Book movie ever made (although it may be a bit scary for small children as there are some pretty realistic animal fighting scenes.) Wonderful movie!

I thought it was great modernized rendition of the show I grew up with - my son loved it !! Highly recommend.

was an amazing film, one to enjoy with the whole family. definitely a movie that kids and adults could enjoy together ! :)

The new JUNGLE BOOK brings back memories of the book I read when growing up, and offers an expansion on the images I developed as a kid. The character of MOWGLI immediately attracts the protective instinct in the viewer/participant in the story. The 3D effects help this feeling grow, and one is enthralled by the feats he performs with a variety of animals that exhibit almost human reactions to him. This is a great movie for families to watch together, and discuss later over a meal or snack

What an excellent movie! Totally worth it to see it in theatres! :) Visually stunning!