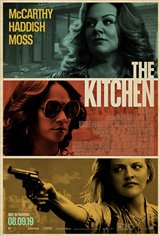 They need to get back in it. This was so bad. M.M.A.S. and watch WIDOWS instead.

Enjoyed the action and women empowerment!

Critics were wrong on this one. It is really good. There is a lot of violence, but given the subject that was not unexpected. The movie suggests that economic necessity, impetus, gumption and cold-blooded might overshadow gender in organized crime. More controversially, the movie emphasized the rolls of public support by local people and organizations in favoring one protection racket over another.

Violent & gory but very powerful. Uplifting to see such power emerge out of mistreated women. I loved the dialogue! Elisabeth Moss is a relatively new, and rising star --- so very talented. She is going to go places fast in the realm of acting, right up there with Meryl Streep -- there is not a role she is not capable of. I love her! Melissa McArthy was terrific in her first very sombre, serious role of acting. Didn't know she'd be capable of it but she was superb & pulled it off perfectly & convincingly. Excellent movie.

So much violence and gore,,,do we really need to know how to cut up a body? No redeeming qualitry. I hated it!

We liked this movie. The acting, yes acting, not special effects, was good. Nice twist at the end.

Ok, but rather weak. I'm not sure but I think in light of all the shootings Hollywood thinks they are playing it safe by having women rather than men having the guns in their hands. I guess I was disappointed- I mean 40 years on can't anyone top films like the Godfather? This film is watchable but hardly memorable. A year or so from now I hardly will remember having seen the film.

Did not like it. To much violence especially with what is going on in this COUNTRY. Save your money for buying a ticket

The acting in this movie was outstanding - who knew Melissa McCarthy and Tiffany Hadish could do such a great job acting in a dramatic role rather than a comedy (and Elizabeth Moss too, but that wasn’t a surprise). Definitely violent, but it’s a mob type of story, so to be expected. I really enjoyed it. I think it would appeal to both men and women.

Thank goodness it wasn't any longer!

It had some surprises and stayed interesting throughout

This movie has too many boring parts in it with some unnecessary swearing in it. The ending is terrible. Save your money.

If this movie is rated more than 1 star. Excuse me people but you need to get out more and watch movies that are worthy of 4 or 5 stars. This is not one!!!

This movie shows how women have walked in fear of attack or abuse for a very long time. It was actually uplifting to see how strong the women became in a very male-oriented (under)world. Not pro-violence, but when the choice is running and hiding in fear all your (potentially short) life or fighting back and taking charge....well.

This Kitchen sizzles with fine performances and clever plot twists. 5/5

Not the most exciting movie.

Seemed to drag on and on Great cast but fell short