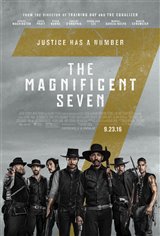 Entertaining although certainly not a believable story line. Still, the acting was above average and it kept me watching without boredom to the end.

The acting was top notch but the story was lame. The part where Denzel disarms the girl at the end, after she saves his life where he is mono-logging with the villain, lame there may be other enemy survivors out side and you just disarmed the maiden WTF. Who brings a gatling gun to a hostile business discussion especially in the old west.

I didn't think I was going to like this movie but I loved it! The acting was excellent.

I really enjoyed it... better than I had expected.

An excellent western flick. Will give a narrow edge to the original with the likes of the late Charles Bronson and Steve McQueen.

Lots of violence. Main characters gave a good performance, but subordinate roles were poorly acted -- like TV westerns from the 1950's.

Best movie this year. Loved it and I will own it.

Loved the movie. Good actors all around. One of the few movies around with no nudity so you can actually take the kids to see it.

Not as good as expected and slow to watch. Good acting rates this to a 3 star. Exceptional movies deserve a 5 star and this isn't.

Storyline always the same as the original and the TV series. Characters were awesome, action was on point and most of all it was thrilling! Must watch if u enjoyed the original or just into action movies. It has its dramatic moments and then the comedy to relieve some of that sadness! Exciting and thrilling!

The whole movie was superb including Denzel Washington's performance. He's always been one of my all time favorite actor. Overall the movie has a Great cast and my kind of western/action movie. I still watch the original when it comes on the Western Channel which is my favorite channel to watch.

Decent movie, not as good as expected however. The action scenes are very cool, but the movie is a little slow. Worth a watch.

The original is definitely my all time favorite western. I've watched that over a million times since I was a kid. I was skeptical going into this one. I heard the story was different and the characters were different and they are. Let me tell ya this one is real good. Best damn film I've seen in years! Vincent D'onofrio was my favorite of the new seven. Jack Horne. Everyone will have their own favorite out of this bunch. Who is yours?

Not much more to ask for in a western! Good storyline, acting,horses and good looking Cowboys! We really enjoyed this movie.

This movie had all you want to see in a western! Action, Indians, Guns, Bad guys, Good guys and of course Horses! I must say that Denzel makes a mighty fine looking cowboy!

Excellent!! For those who say there was too much shooting, I disagree. We all know that is what this story was all about!!! Good against evil e.g Lord of the Rings Denzel & Chris were superb

Fantastic western!! Great cast. The remake matched the original. A must see.

Spectacular movie. All production features at a high level. Music perfect, energy that drives the picture with a referential tribute to Sergio Leone at the end. Acting superb. I hope there was appropriate supervision of child actors, and the horses.

enjoyed it. worth the see. I wanted to see a wild west shoot'em up get the really bad villains action movie, and got what I wanted. it was a fun flick. they gave it nice realistic scruffy primitive ambiance look to it, except near the end, the fancy weapon used was a bit too pristine, to look like it was for its time ... much like how out if place denzel's hollywood smile for an olden days cowboy movie (hero-lead notwithstanding) ... violence was on the brutal side, nothing tame here! nice to see a diverse cast, and all get to speak American English with minimal foreign stereotype accent for a change! (an extreme hollywood rarity: e.g. east asian guy sounds American!)

I must say that I was not that impressewd with this movie.The last 20 minutes was entirely shooting and killing with very little storyline.Can't they come up with another Schlinder's List, Shawshank Redemption, Airplane etc ? It might appeal to teen agers or those who play action centred video games.

I think it's a great western movie and just as good as the first one.

A classic in all ways

Chris Pratt and Vincent D'Onofrio stole the show. Tons of action, almost non-stop and plenty of laughs. Original movie doesn't come close to this at all, that was white guys hanging out in a town chatting with Mexicans, doesn't compare.

A very good movie! I watched the old movie some time ago, and I like it, and this a very good remake, it make it justice, actually... better than the original. Vincent D'Onofrio was amazing! Love, love his character, stole the movie, Oscar worthy!

I agree with another reviewer that the original magnificent 7 was boring. The remake was awesome. If you want an equally awesome older western try The Professionals. One of the best.

Most satisfying. Good guys who know what they are doing take on a sack of sh*t bad guy and the human garbage who follow his orders. Sounds all too familiar in the 21st century.

Denzel and Chris Pratt were Phenomenal as usual! Every Main Character played there part very well! Action packed and intense! Had you on the front of your seat! I would recommend this movie to everyone!

Magnificent movie! Great cast! Loved Denzel and Chris Pratt! Peter Sarsgaard made a great bad guy! Lots of action and laughs! Would see it again or buy the DVD. It's a must see !!!!

Excellent remake, as good as the original, Denzil Washington and Chris Pratt are awesome, went with a 3 generations of ages, and we all liked it!

Lots of action and some humor. Chris Pratt and Denzel are great. Bad guy was a small whiny actor that wasn't good enough in the role.