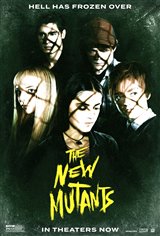 Junk movie. Slow pace. Last 20 minutes things become exciting. Only a moron would rate this movie 5 stars or people that have no taste in movies.

in and out of sleep. the last 15 mins was the only part that was good!!

Are you kidding? This was such a waste of money. Have to shove ideology down our young people's throats. Just tell a good story, get rid of this rubbish underlying undertones. This is supposed to be a comic movie not this junk. Would rate it negative stars. Going to theater for entertainment, not this. I love superhero movies. Not this garbage. Marvel should be embarrassed.

The character chemistry was amazing.

This movies had sooo much potential!! But it's like they filmed it, did one edit and said, "It's finished!" 🤦🏾??? The main girl in the movie could not act!! The best character and actress was Magik, the Russian girl. Game of Thrones chick was so unnecessary. The boys were just there. The doctor was okay. One of the problems with this movie is that you didn't care about the characters really, you didn't care what they were going through. Everything felt rushed. The only one that had a heartfelt storyline was the Russian girl. Download the movie or wait for it on VOD.

Not great but way better than expected.

Wouldn't have been too bad if it wasn't laced with Leftist social/political brainwashing. Guys take a hint, Leftists can't make movies!

The mutants are cursed with extraordinary powers. It's an irony that they are supposed to be next evolution in human race yet outcast. The real curse is that I don't care anymore for further X-men permutations. Or is this the curse of the "Game of Thrones"? Emilia Clarke (Terminator, last Christmas, Solo), Maisie Williams (TNM) and Sophie Turner (X-men) have not fared well. All their movies were par or sub-par. Sometimes the actors are subpar but the material like (GOT) is so amazing that the actors are elevated. But subpar actors + subpar material = save your money and go see something else.

The first hour is as slow as frozen ketchup. The last 30 minutes is when all the action happens. The entire movie can be condensed by 45 minutes. You would think that the delay in release date would give producers time to make an exceptional movie. Is Hollywood lost?

It is a one time flick movie. First hour kinda slow pace not much action. Last 30 min things become exciting lots of special effects. Not a horror at all more like an action thriller with some creepy parts in it. All in all save your money watch it in Netflix

Not your typical superhero movie. I am not a Critic, but I thought the acting and writing were top notch. The relationship between characters was very organic and felt natural. Especially Maise Williams and Blu Hunt.