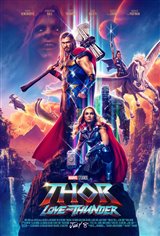 MARVEL IS DESTROYING ITSELF

Objectifiction of men is apparently good todays and women are worthy of whatever they want just because they are women.

I don't know where to start - Marvel is over, it's done, it died, but it just doesn't seem to know it yet.

The story and lines were so sad, I felt bad for the people who were paid to act. Clearly the moguls want people decrepit. About six in a two thirds full auditorium were laughing the whole movie. It was clear they were on strong drugs. My sympathies…

Better than some people say. You don't have to kill everything All the time. Rekindled romance with former flame. A lot of action.

What a waste of time crap

went with my niece and her father. it is a nice story line about a devoted father to a daughter but absolutely horrible otherwise. maybe a few special effects were good, but they are in the deep recesses of my mind. i didnt even get sit in the revliner seat which would it more barable.

I liked the humor and the drama.

Marvel: "OBJECTIFICATION OF WOMEN BAAAD!" Also Marvel: Objectifies Thor in the worst way they can get away with in a PG13 movie.

Absolutely childish film. Also, they need to focus on screenwriting.

So many silly scenes which shouldn't have been, mostly at Thor's expense. The movie seems to want us to not take Thor seriously, almost as if they want to belittle the hero in him. Certainly not the Marvel Thor, that I read in the comics for decades. Poorly written. It was almost a spoof of Thor. One of the most noble Marvel heroes, reduced to the butt of many a joke.

pop corn fun..... enjoyed this movie and would watch it again, were their parts even i thought were much but if u do what people here want then u would get the same old same old, take a pill and enjoy it for what it is a entertaining flick....as not all marvel are and shouldn't be the same

One of my favorite movies

nothing new. same old. you know what I mean. typical, old school.

Raspberry Award for Most Annoying Character in Movie History Star Wars: Ha Ha, we've got Jar Jar Binks! We win! Thor: Hold my hammer. I see your Jar Jar and raise you by TWO GIANT SCREAMING GOATS! If you want to know what I'm talking about, see the movie. But it will be at your own expense! Don't say I didn't warn you! Seems Marvel is on a race to the bottom here!

Thor was my favourite comic book hero. This parody of this character was without a doubt the worst Marvel movie. Hope they get a new director for the next one.

poor script. Guardians were made pretty cheap and cheesy. Thor character wasn't as funny nor the same without Loki which they conveniently killed off. The weaving in of other Marvel characters was seriously flawed and lacking and overall, it was hard to stay awake. For a sequel pretty average and for Marvel, one of the worst yet.

Thor should not be a comedy. Have some respect! and it was a bad one at that.

This one tries way too hard for laughs and appeals to younger kids and as a result ends up being a little too cheesy for my tastes.

It's about time that it was geared to the younger ones. Great too take your kids to definitely a family movie

Bring back the classic Thor instead of this standup comedian!!

Not appropriate for young kids.

As others have said, a poor parody of previous Thor movies. They make him look like a buffoon and ruined a great character. Not for kids. Sad to see the franchise devolve this way.

Somehow it devolved into snarky, campy, inside jokes for the actors and actresses. It sort of felt like they all were jealous of Matt Damon’s cameo in the previous movie playing a bad actor within a play, within a movie. For whatever reason, it just got ugly, 80’s hair metal ugly, with zero redeeming qualities. The popcorn at the Riverview is worth 1 star though so 1star.

Too bad Disney ruined another Dynasty. Marvel will never be the same 🤦???

Watching this was like finding a drunk person in a ditch but when you turn them over, there are ants all over their face. It was like that.

I thought it started out good but it really turned into a spoof/parody of Thor! I thought much of it was corny, I had no idea that Thor was going to be Butt naked in the movie and they had to push the gay/lesbian agenda not just once or twice but several times. Beware taking children to this movie, we had far too many young kids there during our showing! I sure wish that I hadn’t wasted any money on this waste of a movie!

I think they went overboard with making the movie less serious than it should be. this movie has the best actors and best storyline, yet, when you watch it, it seemed like a cartoon rather than a movie. I think this movie should have been more serious telling the story of Gorr and not make it just a funny movie (which turned out to be not funny)

Major cringe. The dialog was poor and it wasn't kid friendly. Definitely a disappointment from the last thor.

The opening scene introducing the villain and his origin story was fantastic and really set the movie up to be in the top marvel films. Unfortunately, what proceeded it was rather disappointing. When the movie was over, I had honestly felt like I had watched a parody of a Thor movie. You could have named it “Scary movie 9” and I would have almost believed it. They really overdid it with the comedic writing, many of which fell flat. There were a few that were just straight cringe to the point that not a single person laughed and there was a very audible “EHHH” from the person in front of me. It felt like there was a joke every 30 seconds and it really stifled the serious elements in the movie. Christian Bale was amazing and what little we saw of him was honestly the only redeeming factor in this movie. Really such a shame they underutilized him.