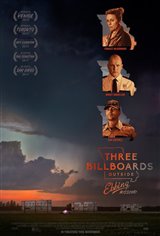 Liked the acting, (the advertising guy mumbled wayyyy too much at first)... but really how could the cop hit the advertising guy and throw him out the window and likely break the secretary's nose and basically only get fired?!?!?! He didn't like the billboards but he took it wayyy to the extreme. Hated the ending. Yes they might kill a POSSIBLE rapist who they both were unaware visited the mother in her store and oddly threw a $7 item and smashed it as well as admitting to raping a girl while an x-cop was in the booth (who you could totally see sitting there!..FYI any cop will tell you they will sit facing the door so they can see who comes and goes), they were likely going to kill the possible rapist killer. I didn't mind it, the acting was good but the story had too many holes and conveniences.

A good story and acting but downgraded it due to far too much crude language and sexual references . Though expected of such characters in this film, could have been toned down somewhat.

The acting was excellent! The movie was so engrossing...very dark at times but then we found ourselves laughing at times also... dark humor? It is such a powerful story about how sorrow, hatred, anger, and revenge can consume you.

Frances McDormand's fantastic performance is worth the price of admission. The accolades and awards are well deserved.

The movie is a logical mess, becoming increasingly unbelievable with every passing minute. The events are contrived. The writing becomes increasingly desperate. I wish that the movie had had respect for our intelligence. The movie wastes fine actors like Frances McDormand, Sam Rockwell, Lucas Hedges, Zeljko Ivanek, & Peter Dinklage.

Didn't need the foul language to that extent but the acting was supurb.

The premise was a good one but there were too many unrealistic characters and unrealistic scenes to support the storyline. It bordered on outrageous at times. I mean, really......billboards are on fire and that measly extinguisher put out the fire??!! Ridiculous!

Great movie!,, one of the best I have seen in awhile!,, entertaining !,,

Really enjoyed this movie ! Acting was fabulous ! A must see!!,

The characters were well done cause that’s how stupid men deal with “women who ask for it”. A little too much swearing but tolerable. What was nice to see is that there IS hope in this world.

Disappointing after all the build up. Performances were good, but I found to be slow and overlong.

I honestly don’t have words for this. There was some good parts, and I tried to get into it. However I just don’t like this movie.

Boaring movie and I honestly fell asleep during it.

I loved the movie and I absolutely loved Frances McDormand in it. She was brilliant!

I would not recommend this movie to anyone. The language was vulgar and not necessary. I walked out of the movie. The storyline could have been presented in a much more professional acting manner without the vulgar language.

Wow! Great Movie! several unexpected twists and turns. The Characters were very well developed and the acting was so flawless that all of them were completely believable.

Not a very good movie even if the acting was good, couldn't save it!

OMG....Frances McDormand really outdid herself on this one!! LOVE this actor!! Couldn't have chosen a better star for the part! No wonder there were so many awards handed out for this movie....totally deserved. Don't miss this one!

The worst movie i have ever seen! Should have walked out with the first g.d. word.

Movie was advertised as comedy,drama & l am still searching for some humor. Disliked the vulgar language

Great movie, the ending leaves you guessing, but that's because it's based on a true story and an unresolved murder. Frances McDermott is spectacular.

Interesting movie for about the first half. Then falls apart at the end with a meaningless ending. I walked out feeling cheated and wishing I had not come. Like "Moonlight" from last year, I don't get what the fuss is about. See Darkest Hour instead. Or the Post.

Absolutely stellar!!! Frances McDormand is a powerhouse and Sam Rockwell’s performance is outstanding!!! Loved the realism, themes, and dialogue...the wit and humour that punched through the drama. I smell a few more Oscars...

This movie is spellbinding and has some of the best acting I have seen in a very long while. Frances MacDormand is outstanding and worthy of the awards she has won.. Hopefully, this will include an Oscar in the future. I wish this movie were showing for an extended period of time at AMC Lennox.

Brilliant movie - my favorite of 2017. 2nd is Darkest Hour. Frances and Gary for Oscars.

It was okay, but not as great as the hype would lead one to believe. It is not as artful as it thinks it is, and McDormand is good but pretty one-note throughout. I thought Margot Robbie in "I, Tonya" had better range, personally. Not sure what the Dinklage plot was doing in there, and the turnaround of the Rockwell character isn't believable. Harrelson is good, but overall this was not all that memorable. And I thought the ending made the entire moral of the story ridiculous. Not a must on the big screen -- wait for Netflix.

This was an excellent movie! The acting was superb all around. You really felt for the characters, especially the woman that Frances McDormand portrayed.

I really wanted to like it. Lord knows you can't away from all of the critical praise that has been heaped on it. I just thought it was GARBAGE. End of.

The movie captures you from the start and doesn't let you go.

This movie could have easily received five stars.... but what could have been a masterpiece had one real flaw in the addition of a plotless character. The over clever writing of the conclusion was a real flaw that gave no validation or vindication for any of the masterfully crafted characters. The performance given by the cast was stellar and it was a real disappointment that the story told, fell short in the end. I did not expect a cheesy, feel good ending, just something as thoughtfully written as the rest of the script.

Best movie I've seen in a long time!! It drew you into the lives of three main characters, very personal, intimate. I loved the pace of the movie, not rushed. I found it to be quite unique and therefore not a movie for everyone. I was very pleased it won Golden Globe for Best Picture!

Great acting! Saw this movie twice, and it only gets better.

To all the haters here and writing negative reviews....uhmmm, guess which movie won golden globe for best film?! 3 BILLBOARDS!!! Wooohooo, said it from the beginning that this movie was gonna win tons. Anyone who hasn’t seen it yet, ignore all these negative reviews and give it a chance. :)

Hardly a "diamond" of a movie given the many holes in the plot and despite the many good reviews (imho) even with the often excellent acting. The lack of any even slightly likeable characters made the movie an arduous grind to my wife and I and we were glad when it was finally over. Ebbing MO, albeit a fictional town, is one angry and twisted place that should be passed by. There are also so many unbelievable and unlikely people, actions, and scenes in this story it does make me wonder, wth were the writers thinking? This movie also had a pretty short run in my city, which is telling, and I was not at all surprised once I had seen it and noticed a very small crowd in there with me. But no matter what anybody says (incl me) go see it if you want to (that is if you can find it still playing), but my best advice based on my personal opinion of the movie, would be to wait and watch it on PPV, or better yet, when it's on a free movie channel. That's all folks!