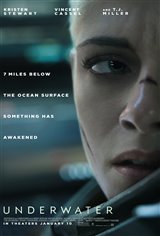 A movie that takes a pee on your nice SUV. Pure destruction! Miss it. It's boring.

Tired chiche nonsense. Stewart's non-acting career flies in the face of all reason.

Not a bad movie at all. Kristen was great and a welcome departure from moody roles. Overall the underwater scenes were a bit dark and difficult to see but it kept u attentive to the movie and the suspense. It has not gotten great reviews but really, have u seen whats out there for movies. It was entertaining. Great cinematography, in a challenging environment. I give it 4/5 stars. Give it a play, it was a fun watch.

Not bad at all. Good visual effects and it don't end like the usual way.

I liked this creepy movie plot.Tired of space movies. Our planet is 70%water and impossible to fully ecplore. Very cool to see an aquatic civilization Twists, turns,jump,JUMPscares. Acting was well done.

The suspense was riveting, that’s about it. The visuals were unclear, the reasons for the attacks were never explained. Do lesbians understand that they can no longer act as a heterosexual girlfriend. Ask Ellen, it’s true. Christian Stewart just isn’t believable. She makes a great Justin Bieber however.

The Great Old Ones will be pleased.

These people don't resemble actors in the slightest.

Amazing documentary. These people look so much like actors it's hard to believe this was real. 5/5.

Yet another terrible ALIEN rip-off (can we finally stop with these??? It's been FORTY years!) with yet another atrocious performance by Stewart, the worst actor ever.

It's good. It's a fun riff on Alien with a clever setting change. It's not reinventing the wheel, but it's an entertaining watch with some good suspense moments and claustrophobia.

aliens reboot, very predictable, trailer was created before they finished the movie, so the movie started half way through the plot with no introduction

My rating would be 3.5 stars but I rounded up since it's closer to four stars than three. POSITIVES: Great production design, fast moving, reasonably suspenseful with a few jumps here and there, underwater aliens looked pretty cool, good special effects, and running time was just right for this kind of movie. The makers knew what they wanted to accomplish in making a fast paced underwater adventure/horror movie and jumped right to it. So yes, for those who love movies that spend a lot of extra time on character development or who are looking for award-winning performances, this won't be for you. Not that the acting was bad or anything (at least I didn't think so), but this is not a character-driven movie, it is a situation-driven movie. NEGATIVES: Could have done more with the cool sets they built, and the soundtrack was too overbearing. There was almost always some kind of dramatic music playing and I felt like I was watching a Michael Bay movie at times. I think some moments of actual silence would have helped build the feeling of suspense and isolation. And yes, there are definitely some comparisons that can be made to the Alien movies and to previous underwater monster movies like Leviathan and Deepstar Six, but so what? I remember when Star Wars first came out and for at least 20 years afterwards every new space movie that came out was labelled as a Star Wars ripoff (except the Star Trek movies, which had their own legacy to build on). Anyway, you either like these kind of movies or you don't. I personally like them, so I enjoyed Underwater.

Starts quickly with an action wow and it's off to the races. Solid small compact movie, nothing great and noble here, but very well-done. Good story, quickly paced, never boring, and Stewart is the heart. She makes this thing worth watching.

Waterlogged film is painfully derivative. Tiresome and cliche. No real surprise or suspense, and Stewart gives her usual terrible performance. It's like she's campaigning for a Razzie lifetime achievement award.

Unoriginal and boring. I was counting the minutes.

It's absolutely terrible. It's also laughable that someone said this was "original" (!). This is likely the one millionth rip-off of ALIEN. And Stewart is a horrendous (natch).

Not a bad flick , it has some good action and some good jump scenes , but in my opinion it could've used a bit of back story , and some character development . It has a bunch of characters that you don't know who they are, or why , or where they are. You just get the drift they are underwater ( hence the title ) and some kind of shit hits the fan . Also the dialogue seemed a bit low and muffled to me , kind of hard to make out what they were saying at times . All in all not bad , not great IMO .

Better than I thought it would be, good filming, creepy, a few good thrills. Enjoyed it for what it was.

Definitely a sci-fi thriller, and very imaginative. Refreshing to see something new and different, Hollywood is getting repetitive with there remakes. Quite predictable though. Time spent out of the cold anyway.

Loved this movie. Absolutely a thrill ride from start to finish. Boggles my mind how some can dislike it so much. People, what were you expecting this movie was about? It is a horror scifi. Not a romance. Had good acting, amazing visuals, fantastic design and was original. I am an Alien nerd. It's my #1 movie of all time. This movie is not a rip off of Alien just because there are similarities. People flock to all the remakes, sequels, reboots and prequals that Disney puts out, yet can't even try to enjoy a really well made, original scifi horror. Too bad, cause it deserves better than the hate it is getting. This movie deserves to be seen on big screen. Trust me.

This movie has nothing on The Concorde: Airport '79 but it's still a fun ride.

I give this movie 0 stars worst movie I’ve seen in a long long time. Should have left after 15 mins and got my money back

The storyline is nothing new, but the acting was very good, and it had humor mixed in with good action. It was well worth watching as long as you are not requiring everything be believable.

It is far-fetched even as Sci-Fi movies go. Yet all the actors, especially Kirsten Stewart, did a very good job and must say I haven't jumped so many times in my seat for years!! It's action packed from the minute it begins. Don't think it will bore you and the thrills work for just the right length of time. Not sorry at all seeing despite giving it 2 stars.

Brings back fond memories of movies like Deep Star Six and The Concorde: Airport '79.

The screen play was excellent and, because it is based on a true story, I found it timely and a movie everyone should see. The acting was believable and the casting near perfect.

Same old storyline . Hollywood is really dropping the ball. If its not a sequel or a remake then there is very little to choose from. Thankfully the UK and Australia are producing good films

Stewart hasn't been this good since CHARLIE'S ANGELS.