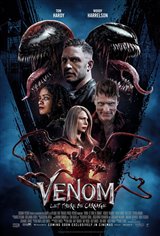 Movie was good, but still thought that the first movie was better.

Not a very good movie. Makes one want to go read the comics which were much better.

this movie was lit

I couldn't even finish watching this waste of my Marvel time. Embarrassing.

It was funny, but got a little over the top towards the end. Was entertaining though.

I'm not up that much on the Venom lore but I think I know enough to say that the report between him and Eddie was tiresome and overdone - and annoying really. Carnage was good though.. kinda. If the 3rd one gets cancelled, I won't lose sleep.

This is one trilogy that should stop at two.

Sadly this movie is abysmal trash. Worse than Shang Chi. Worse than Black Widow. Worse than captain marvel. Worse than Batman returns and Batman and robin. It's BAD BAD BAD. All around bad.not good.

Another attempt at the 'anti-hero' by trying to reform an alien psycho serial killer, Venom, by having him satiate his blood lust by geeking chickens instead of humans, but it's O.K. if he beheads a human criminal once in a while. Meanwhile his prodigy, Carnage, behaves the way Venom is suppose to, but Venom is the hero? Both Venom and Carnage are equally dangerous to humanity.

I laughed so much I almost cried! The duality is great. The funniest scary movie ever

I enjoyed this silly but fun movie! Just so nice to be back at the cinema!

I think it was not that good would not recommend if you are nine and under.

It's ok. Not much of a story, and it's kind of random. Not much character developments and Venom and Carnage powers are rather boring. But it's worth watching for the action.

My Friend and I saw the Opening Yesterday and it was fun. The Graphics were pretty cool. I still thought very good after the first one I saw. I wasn't Disappointed.