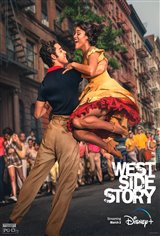 The story had more depth than I remember the original having. Also, this version flowed more like a film than the first, which came across as a play that was filmed. The music and lyrics are timeless. Loved that they gave "Somewhere" to Rita Moreno. Will see it again.

This movie was beautiful! The dance numbers were great. Loved it. Must see on the big screen.

The first. Hour and a half I found really dragging (the preparation towards the street gang brawl) except for the dancing which I expected much More, beautiful voice Maria, enjoyed the Latino, English well done. Some Great acting.

I waited for 2 years to see this and it did not disappoint in any way! shot beautifully - great cast, punched up script from the original - but still very real and authentic. BEST PICTURE FOR SURE! The young Maria and Bernardo and Anita were off the charts fabulous and all got Golden Globe noms! A real love story with incredible dancing - go see it on the big screen while you still can!

can't beat the story line and the music. Flashback to my youth.... Found the background buildings in this version depressing and staged. 2 thumbs up for the revisited feelings!

Maria stole the show. Liked everyone except Tony who seemed miscast. Rita M was also a treasure. Dancing was fabulous.

Liked the old cars! Would have liked a better Tony, Bernardo and Riff tho. Dancing was very good. Loved Rita Moreno! Only 9 people in theater. Regal in Clarence was very dirty!

I'm not a musical kind of guy but I was so impressed by the whole package under Steven Spielberg's direction. Choreography, execution, the mixing of the music and sequences, the actors as Tony and Maria, and the gangs and the cops. Really drew me in. I hadn't paid attention to West Side Story since grade school. This version has the old one beat. I recommend it.

I love this movie! It was so moving and well done! Anyone who loved the original, should see this one!

I loved the music, dancing, and story. You have to appreciate the original story and the times to get the full effect. Enjoyed it more then Spiderboy!

Loved the dialogue and the expanded backstory of the main characters. The acting, singing, costumes, direction, sound editing, and dancing were outstanding. Spielberg managed to take an old musical and make it feel modern-honoring its past while updating it for the present. There were lines in Spanish that I didn’t fully understand but it mirrored beautifully the experience of trying to adapt in another’s environment/culture. I’ve traveled a lot and often been in a country where I didn’t understand what was being said. The choice to include Spanish dialogue served to remind English speakers of the experience of non-native speakers. A story deals with topics that are still relevant today: toxic masculinity, anti-immigration, transphobia, and interracial relationships. Oscar worthy picture.

Common people , with so much Spanish spoken but no subtitles many of my friends who did not speak could not speak Spanish could not follow.

As a New Yorker , Puerto Rican & from growing up in the 50/60’s in NY I know first hand the life in the ghetto streets. The original , while flawed in several areas portrayed the life and anger of the streets. This re-creation badly missed its mark. Various actors were mis casted: riff was a mouse voiced guy, Bernardo and several other Hispanic actors were obviously in their late 20’s to 30’s. Maria & Anita were effective. Rita Moreno took an interesting role as the shop keeper. The real anger and hatred that each group had fir each other was missing. All in all it tried to re-create the past but it had no soul.

Save your money, very dreary, and u miss a lot if you don't understand Spanish

The "one star" idiots are at it again. I saw the original - great score, dancing & humor thrown in. Very much looking forward to seeing the remake today.RH

Wonderful casting, beautiful music and great dancing. The themes are timeless from Shakespeare's time to the present. Love knows no boundaries, but outsiders who hate anyone who doesn't represent another version of themselves will resent those who look beyond differences or find them reasons to love, not hate someone else. Loved this timeless tale.

Great film....you can tell by the comments here that many people had no idea what they were actually watching or the history behind it, but felt compelled to make non-sensical comments anyways. It is a quality film, a great musical. Well done!

Spielberg's retelling of West Side Story is brilliant. The screenplay by Tony Kushner, the acting, the dancing, the vocas, the cinematography are all superb. What a great afternoon at the cinemas.

I appreciate the effort that went into making this, but there was simply no reason this story had to be told as a musical.

Whenever the movie looked like it was going to get interesting the cast would break into song. I also found it difficult to believe a bunch of street toughs would have such an affinity for dance.

Boring boring boring. Of the 5 people in the theatre 3 fell asleep and one actually snored. Terribly dull film. No chemistry between the actors.

Just ok -- reminded me of an earlier version of the same Story.

It was okay I guess. Too many minorities.

Would make a great double-bill with The Cobbler.

Quality of singing and orchestration; dance; acting. Great story line applicable to tensions today. Attention to detail. Faithful to Bernstein and Sondheim original with a focus on realism.

just boring, hardly worth the ticket

Better than House of Gucci and Encanto combined!

The movie followed the original story line closely, although the sequence of events changed slightly and some songs were sung by different characters. The ending was more emotional for me this time. I left the theater crying.

The original is still best! The remake was too graphic and the dance scenes not a good.

As a teenager, I saw the original production on Broadway & a half-century later, this version of the classic tale was just as thrilling!