Rose McGowan is not too pleased with Natalie Portman's Oscars outfit and she's calling her out for it.

On Sunday night at the Oscars, Natalie wore a Dior gown covered with a gorgeous cape, which was embroidered with the names of those female filmmakers who were snubbed for Oscar Best Director nominations. Many admired the stand Natalie was taking.

However, Rose didn't share the same sentiments. In a Facebook post, she slammed Natalie, saying: "The kind of protest that gets rave reviews from the mainstream media for its bravery. Brave? No, not by a long shot. More like an actress acting the part of someone who cares. As so many of them do."

Natalie's company, Handsomecharlie Films, has produced seven films so far, with Natalie's A Tale of Love and Darkness being the only female-directed film.

"I am singling you out because you are the latest in a long line of actresses who are acting the part of a woman who cares about other women. Actresses who supposedly stand for women, but in reality do not do much at all. Of course women in the world will keep buying the perfumes you promote, the movies you make, and think they’re buying into who you are. But who are you?"

This is not the first time Natalie has showed support towards other female directors. Last year, when presenting the 2018 Golden Globes for Best Director, Natalie made headlines while announcing the nominees when she said, “And here are the all-male nominees.”

Natalie responded to Rose's statement, saying: "I agree with Ms. McGowan that it is inaccurate to call me 'brave' for wearing a garment with women's names on it. Brave is a term I more strongly associate with actions like those of the women who have been testifying against Harvey Weinstein the last few weeks, under incredible pressure."

She went on to agree that she hasn't worked on many films with female directors. "It is true I've only made a few films with women. In my long career, I've only gotten the chance to work with female directors a few times. I've made shorts, commercials, music videos and features with Marya Cohen, Mira Nair, Rebecca Zlotowski, Anna Rose Holmer, Sofia Coppola, Shirin Neshat and myself. Unfortunately, the unmade films I have tried to make are a ghost history."

"I have had the experience a few times of helping get female directors hired on projects which they were then forced out of because of the conditions they faced at work," Portman said. "So I want to say, I have tried, and I will keep trying. While I have not yet been successful, I am hopeful that we are stepping into a new day."

What do you think? Tell us below! ~Marriska Fernandes 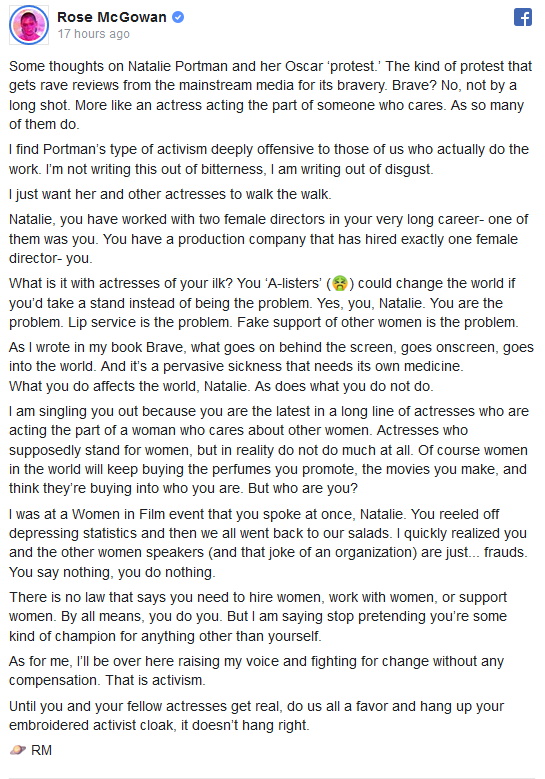