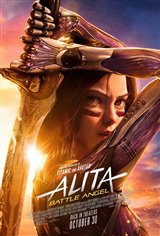 In the post-apocalyptic town of Iron City, Dr. Dyson Ido (Christoph Waltz) discovers an abandoned cyborg core named Alita (Rosa Salazar) and rebuilds her into a new body. There she befriends the young Hugo (Keean Johnson), who dreams of escaping the city to live in Zalem, the city above Iron City.

Together, with Dr. Ido, they discover that Alita is more than she seems, with an extraordinary past as an advanced deadly weapon, which attracts the attention of Chiren (Jennifer Connelly), a past associate of Ido, and Vector (Mahershala Ali), who runs the deadly sport Motorball. They pursue Alita for their own agendas.

In this pursuit Alita takes a stand to be more than her past and discover her humanity.